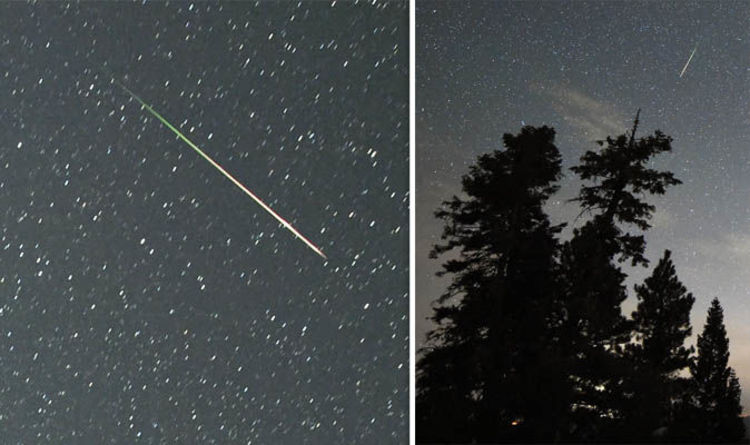 The Perseids will burst out into balls of flame this weekend between the nights of Saturday, August 11, and Monday, August 13.

The annual meteor shower starts to produce individual shooting stars each year around mid-July before it builds in intensity.

The meteors are bits and pieces of space rubble broken off from the speeding Comet Swift-Tuttle.

By around mid-August, the Earth crosses paths with the comet’s orbital debris trail which spectacularly intensifies the meteor shower.

During the peak, the Perseid shower can produce up to 100 meteors an hour.

Past meteor showers have been known to even produce up to 200 meteors zooming across the sky every hour.

This year astronomers are hoping to see anywhere between 50 and 60 shooting stars an hour, or around one every minute.

This year’s shower is expected to be particularly dazzling thanks to the darkened New Moon phase of the lunar cycle.

Perseids 2018: The Perseid meteor shower will be among the greatest spectacles of the year (Image: GETTY)

The New Moon should keep the skies nice and dark on the night of the peak which will help spot the fast-moving meteors.

Diana Hannikainen, observing editor of Sky & Telescope, said: “The moonless sky this year means the viewing will be excellent, and the shower’s predicted peak is timed especially well for North America.

“Under a very dark sky, you might see up to one Perseid per minute late on Sunday night or after midnight on Monday morning.”

The shower will be at its most intense on the night of Sunday to Monday morning.

Astronomers advise looking for the meteors after midnight and just before the break of dawn when the Earth is closest to Swift-Tuttle’s orbit.

On the odd occasion you should still be able to spot individual meteors before midnight local time but they will appear much rarer.

Between midnight and dawn the shower’s radiant, its apparent point of origin in the sky, will be pretty high up.

The radiant will appear to come out next to the Perseid’s namesake constellation, Constellation Perseus. 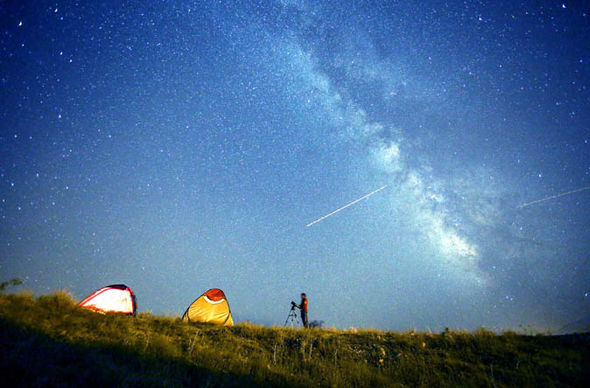 The higher the Perseids’ radiant during the peak, the more meteors you will see.


The Perseids will put on a great show

But you do not have to worry about finding the constellation in the star-lit night because the Perseids will burst out in every direction imaginable.

The fireballs can and will appear in the sky randomly, so the best thing to do is to lie back comfortably and absorb as much of the open sky as possible.

Sky & Telescope senior editor J Kelly Beatty advised: “Relax, be patient and let your eyes adapt to the darkness. The Perseids will put on a great show.” 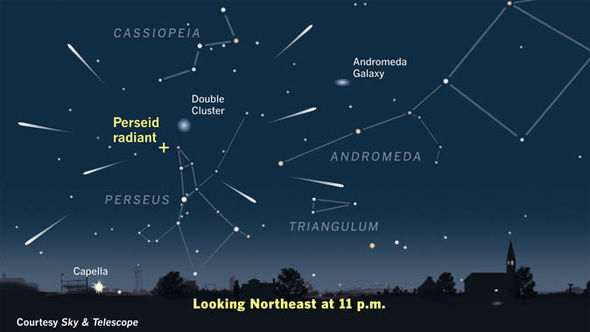 Perseids 2018: The meteors appear to burst our near Constellation Perseus (Image: SKY & TELESCOPE)

But if you are feeling a little bit more adventurous, you can follow the Perseids and trace their trajectory backwards to Perseus.

And the good news is you can do this with nothing more than your naked eyes.

The meteors are incredibly fast moving and trying to spot them with a telescope or high-powered binoculars would only complicate matters.

Just be aware of any local light pollution from lamps and buildings that might make the skies brighter during the peak. 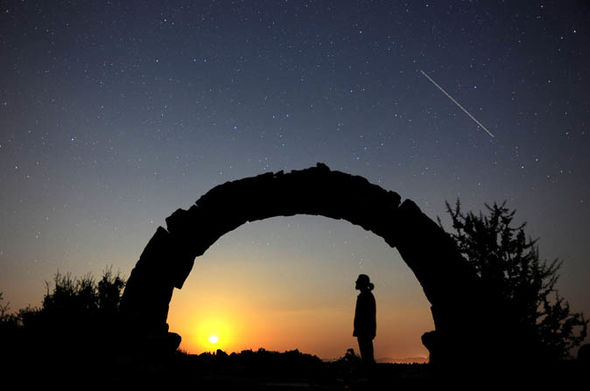 Perseids 2018: The annual meteor shower runs from mid-July to the end of August (Image: GETTY)

Quiet outdoor areas with unobstructed views of the horizon, such as fields and big open parks are usually a good bet when looking for a meteor viewing spot.

If you head out, remember to pack something warm for the night, snacks, drinks, blankets and give your eyes up to 30 minutes to adjust to the dark of night.

Alternatively, you can watch a live stream of the Perseids online, thanks to one of the many observatories around the globe focusing their cameras on the shower.

Click here to read more on how to watch the Perseid meteor shower live online.