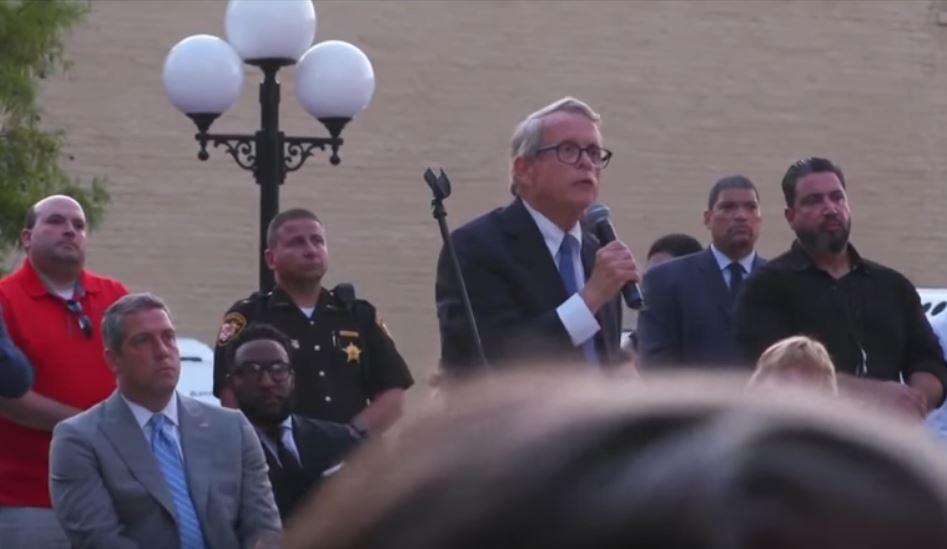 
Something almost unprecedented has happened following the mass shooting in Dayton, Ohio, that killed nine people over the weekend.

Among the plan’s provisions: a “red flag” law, background checks for most firearm purchases, more mental health treatment, and stricter penalties for those who commit a felony while possessing a firearm.

And it looks like DeWine has the public support to back him up: 90 percent of Ohio voters and 87 percent of gun owners support background checks for gun sales.

DeWine’s proposal comes after a Sunday night vigil for the shooting victims at which people chanted “Do something” loud enough to drown out his remarks.

This video by News 5 Cleveland explains the new 17 points plan introduced by the governor:

Some, however, say DeWine’s proposal does not go far enough because it doesn’t address laws that allowed the shooter to access an assault rifle and large-capacity ammunition magazines — which let him fire 41 shots in less than 30 seconds. Even though he was killed by police 30 seconds after he began firing, he managed to fatally shoot nine people.

It also remains to be seen if the state legislature will pass DeWine’s proposals. Since 2011, Republicans have controlled the state Senate and House, along with the governor’s office, and have rejected similar gun control measures in the past.

Like DeWine, many GOP lawmakers have been rallying behind a “red flag” law, which gives police the authority to confiscate firearms from a person posing a risk of violence if officials have received a court order. It may not be revolutionary, but if it were enacted, it would be the most significant piece of gun control legislation in decades.

I think this is a very responsible step toward gun control in the USA.

Dogs Can Be Aggressive For Lots of Reasons, And One of Them Is You : ScienceAlert
There’s a ‘Lost City’ Deep in The Ocean, And It’s Unlike Anything We’ve Ever Seen : ScienceAlert
Bacteria Can Use Plastic Waste as a Food Source, Which Isn’t as Good as It Sounds : ScienceAlert
Scientists Create Shapeshifting Humanoid Robot That Can Liquefy And Reform : ScienceAlert
People Who Don’t Exist Look More Real Than Actual People, Study Finds : ScienceAlert