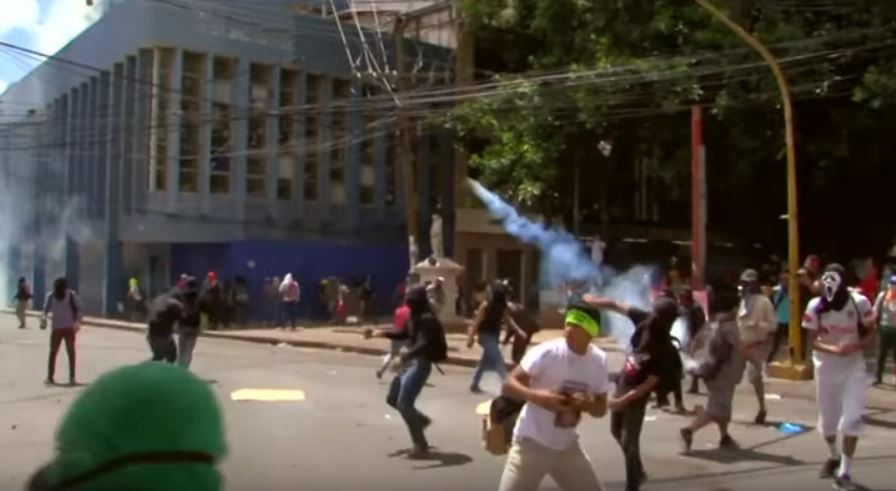 
Thousands of Hondurans have taken to the streets of the capital city, Tegucigalpa.

This in order to demand the resignation of President Juan Orlando Hernández, who has been accused of fueling a narco-state.

On Friday, US prosecutors accused Hernandez of receiving $1.5 million from cocaine traffickers to secure his election in 2013. In exchange, they say, the government protected these drug gangs from the law.

Hernandez has denied all the accusations, but that hasn’t curbed the rising wave of opposition against him amid corruption concerns. Pressure for him to resign has been growing ever since his brother was arrested in Miami last year on charges of smuggling cocaine to the US.

Of course, the protests are nonviolent as Honduran protesters face off with riot police:

The accusations have fueled the anger of Hondurans, who have long believed that corruption runs deep within the government and among the country’s elites, fueling one of the world’s highest murder rates.

This video by Joshua Potash on Twitter, shows thousands of protesters swarming one of the main streets of Tegucigalpa, the capital city:

With tensions running high, the protests on Tuesday took a violent turn: Several buildings were set on fire, and tear gas was used on protesters. These latest incidents come just a month after military police opened fire on students during a separate anti-government protest.

The people of Honduras are TAKING TO THE STREETS.

In protest of their corrupt president.

The accusations toward Hernandez are also a blow to the country’s relationship with the US, a close alley that has long praised Hernandez for fighting drug trafficking in his country. It remains to be seen if the US government is on the same page as the protesters.