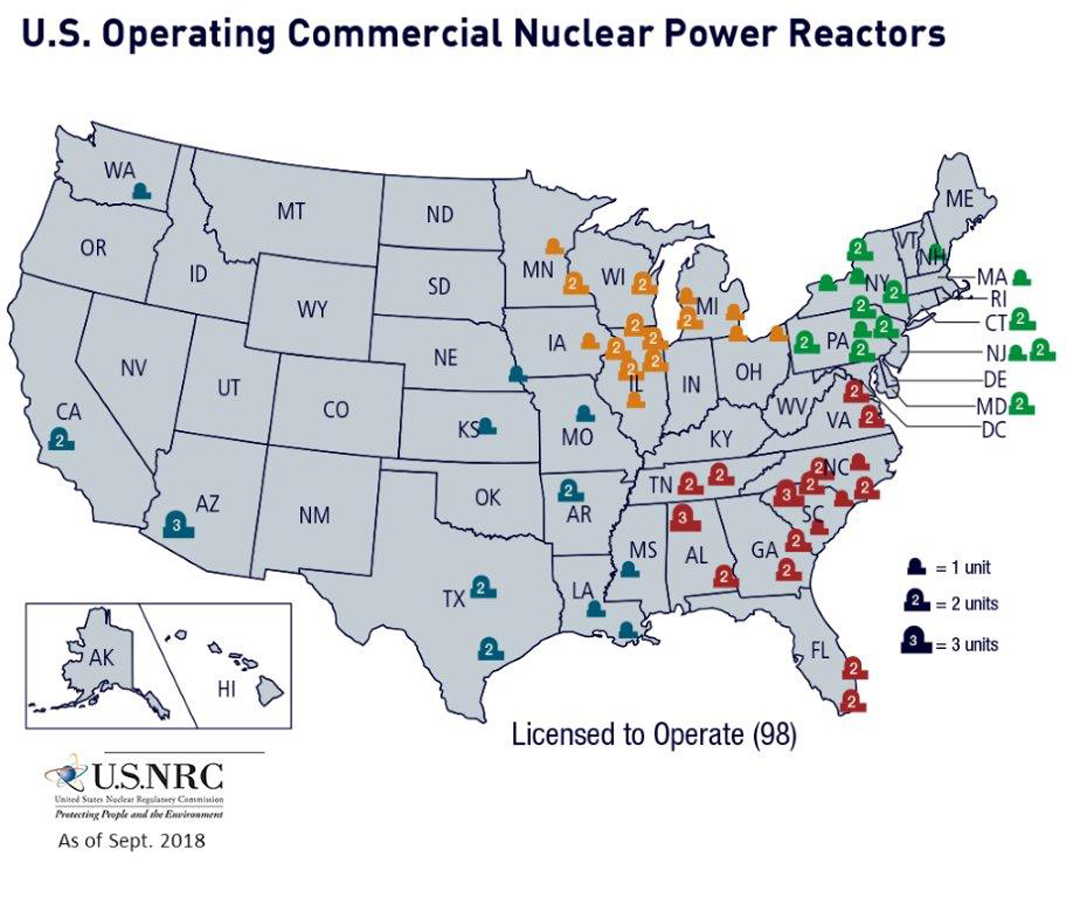 
Across the United States, nuclear waste is accumulating in poorly maintained piles.

90,000 metric tons of nuclear waste requiring disposal are currently in temporary storage. Now, the United States has to find a solution.

The United States has yet to construct a long-term storage solution for this waste, leaving the nuclear material vulnerable to extreme weather events such as hurricanes, rising sea levels, and wildfire.

Nuclear power will be an essential tool in climate change adaptation because it’s capable of producing massive amounts of energy without any carbon emissions. In fact, although nuclear power is expensive to build, the scale and potential of nuclear power represents the most efficient path to eliminate carbon emissions from energy production.

The drawback? Nuclear waste. Dangerous for thousands of years, nuclear waste requires long-term solutions that shield it from living things, but the public pressure to build effective storage solutions just isn’t there.

What is high-level nuclear waste?

Nuclear waste is primarily a byproduct of nuclear energy generation. Nuclear energy harnesses the intense heat released from nuclear fission, where unstable atoms (either uranium or plutonium) are split into smaller elements. This heat turns water into steam, which spins turbines to generate electric power. However, the radioactive byproducts of nuclear energy generation are incredibly damaging to living things because nuclear decay also releases smaller particles — protons, neutrons and electrons — that can tear through tissue and damage genetic material, leading to cancers and birth defects.

Because of these adverse effects, nuclear waste must be treated carefully.

Low-level waste, such as tools that have been contaminated with radiation, typically emits very low levels of radiation that are typically on par with the radiation we absorb daily from the sun.

High-level waste, however, including spent nuclear fuel and its byproducts, is searing hot and requires years of cooling plus thick metal shielding to prevent radioactivity release. Even after 10 years of decay, this waste could emit 100 times a fatal dose of radiation in one hour.

How can we store nuclear waste?

Nuclear waste storage facilities need to be designed to protect the waste from theft, shield it from emitting radioactivity, prevent it from leaking into water or soil, insulate it from release by natural disaster, and hide it from future generations that may not understand its danger.

The main risk of nuclear waste is water running through the sealed storage containers – dry casks – and carrying nuclear particles out of storage.

With this in mind, the two primary options for storage are protected sites above ground and geological repositories underground.

Commercial energy generation produces the majority of nuclear waste in the U.S., which remains stored above ground near each of the 99 commercial nuclear reactors scattered around the country.

Nuclear waste is stored in pools to cool for many years, and some is moved to above-ground concrete casks.

However, these storage solutions are temporary at best.

This form of storage requires personnel to maintain the sites of disposal, to monitor leakage, and to check the temperature and radioactivity of waste. Because nuclear waste could be repurposed for weapons, these pools and casks require a security presence to prevent theft. Above-ground casks are also vulnerable to natural disasters such as earthquakes, flooding, and hurricanes that could overwhelm the storage sites.

While nuclear waste disposal sites are designed to safely store waste for several years, they haven’t been built to a standard that would allow the waste to sit there for centuries without constant upkeep.

Longer-term storage might be possible underground. Within geological repositories, the choice is between storage that is retrievable by future generations (geological disposition) or a sealed site that can’t be reopened (geological disposal).

Decisions about which path to take need to contend with many questions: Can we confidently commit societal resources to manage this waste for the future? Can we scientifically minimize the chances of the waste escaping? Can we ensure social and political support for the project?

Geological disposal greatly diminishes many of the risks of nuclear waste, securely placing the waste underground, away from water sources, hurricanes, and humans. If located in an arid or frozen area isolated from earthquakes, a geological repository would be virtually impenetrable, and would effectively shield radioactive material.

Thus, permanent geological disposal is the main goal of most countries. Many countries, with the U.S., Sweden, and Finland leading the effort, have begun the arduous process of selecting a site that meets intense scientific and logistical standards. Scientific research ensures that whichever site is selected will protect humans and isolate waste. Given the 24,000-year half-life of plutonium, scientists aim to design containment mechanisms and choose sites that will remain safe and isolated for 100,000 years.

For the past 40 years, Yucca Mountain, in an arid desert 100 miles from Las Vegas, Nevada, was on track to become the main site for storing the U.S.’s accumulated nuclear waste. The area has little precipitation, so little water would seep into the mountain. The extremely dense volcanic rock of the mountain has small pores, preventing any water leakage through the rock. In addition, waste would be stored far above water sources in the mountain. These features would effectively shield the waste and prevent the release of radioactivity.

In 1987, Congress directed the Department of Energy (DOE) to develop a nuclear waste storage facility at Yucca Mountain. Funded by a tax on nuclear power companies, researchers vetted the site and designed a storage plan for the mountain. In 2002, the DOE concluded that Yucca Mountain was suitable, and in 2008 they submitted an application to the Nuclear Regulatory Commission (NRC), an independent agency tasked with protecting safety related to nuclear energy, to begin the construction process.

Many Nevadans felt that the DOE did not solicit their input in the process and that having a nuclear waste repository so close by would be dangerous. In 2010, pressured by Senator Harry Reid (D-NV) and the Obama administration, the DOE withdrew its application. In turn, Congress withdrew funding, grinding the process to a halt. Still, the resulting legislation allowed the audit review to go forward, and the NRC reported in 2015 that Yucca Mountain satisfies nearly all of the regulatory requirements.

Why is it so hard to store nuclear waste safely?

The science and policy issues of nuclear waste demonstrate the need for science-informed policy but also show the limits of dictating policy through scientific assessment alone.

However, there is a way forward. While the U.S. fought over Yucca Mountain, Finland has quietly selected, licensed, and begun construction on a nuclear waste disposal facility. Key to Finland’s success was active community involvement in site selection. Indeed, Obama’s Blue Ribbon Commission to study waste disposal in the U.S. concluded that nuclear waste disposal could only be successful with active community involvement. The commission advocated starting a new process of site selection, with community engagement at all stages.

While many fear nuclear waste facilities in their communities, it is not necessarily anathema to all. Nuclear waste storage facilities would guarantee a steady stream of jobs and money for the community. For example, the WIPP site, a repository for lower-level radioactive waste from defense sources maintains much community support because the site provides jobs and actively engages the community, promoting itself as vital to national defense.

Where do we go from here?

While nuclear power constitutes around 20% of the power sources in the United States, and could be critical to climate change adaptation, six states currently prohibit nuclear plant construction until a nuclear waste storage facility is built. Waste storage is the essential piece of the puzzle.

As of May 2018, the House of Representatives voted to restart the Yucca Mountain process. The Trump administration has been sympathetic to reopening Yucca Mountain, asking for $150 million, but was ultimately denied. It’s unclear whether a nuclear waste repository will be built in the near future, but it’s increasingly clear how necessary and how difficult the process will be.