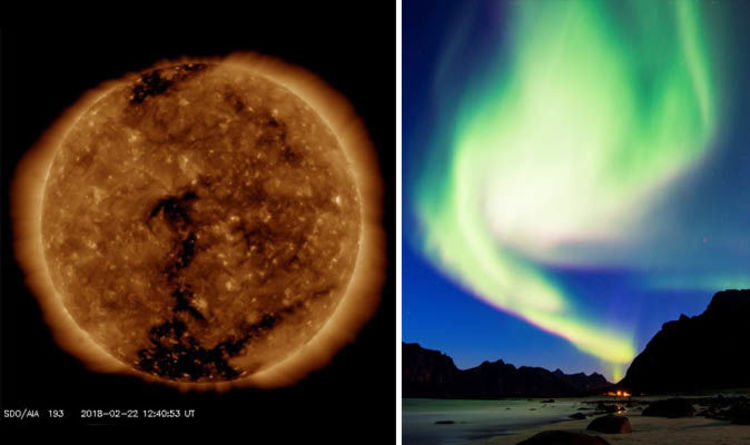 
The Northern Lights could erupt in the arctic nightfall regions when a stream of solar winds clobbers the planet tonight.

A sizeable hole in the southern reaches of the sun’s atmosphere has opened up to release intense radiation straight at Earth.

The ejected solar materials could interfere with the planet’s magnetic field, prompting colourful displays of light in the night skies.

SpaceWeather.com said: “Earth’s magnetic field may be disturbed on February 22 by the glancing passage of a high-speed solar wind stream.

“The gaseous material is flowing from a southern hole in the sun’s atmosphere, now facing our planet.

“Arctic sky watchers should be alert for auroras after local nightfall. “

Skygazers in the Northern Hemisphere, particularly near the North Pole, were treated to a breathtaking view of the Aurora Borealis last week on February 15.

The aurora was triggered by a significant coronal mass ejection (CME) of electrically charged particles slamming into Earth’s atmosphere.

The interplay of solar plasma above Earth’s magnetic north pole painted the sky with various hues of greed, blue, yellow, red and violet.

The auroral oval is still visible tonight in the northernmost parts of the word, stretching from Greenland, to Canada and Alaska.

Viewers in the UK will unfortunately miss out on the spectacle of nature, but there is hope to catch a glimpse of the aurora online.

Astronomy enthusiasts can watch the Northern Lights live over Canada thanks to a webcam mounted at the Canadian Churchill Northern Studies Centre in Churchill, Manitoba.

The Churchill Centre is one of the northernmost places in the world were the colourful lights cover the skies.

The Aurora Borealis is caused by particles from the sun interacting with oxygen and nitrogen in the atmosphere.

NASA explained: “Aurora are one effect of such energetic particles, which can speed out from the sun both in a steady stream called the solar wind and due to giant eruptions known as coronal mass ejections or CMEs.

“After a trip toward Earth that can last two to three days, the solar particles and magnetic fields cause the release of particles already trapped near Earth, which in turn trigger reactions in the upper atmosphere in which oxygen and nitrogen molecules release photons of light.

“The result: the Northern and Southern lights.”

Oxygen particles excited by solar radiation typically take on green hues while nitrogen is known to shift towards red and violet.

Scientists Have a Plan to Turn Earth Into a Giant Observatory : ScienceAlert
There’s a ‘Lost City’ Deep in The Ocean, And It’s Unlike Anything We’ve Ever Seen : ScienceAlert
Physicists Break Record Firing a Laser Down Their University Corridor : ScienceAlert
Earth’s Inner Core May Right Now Be in The Process of Changing Direction : ScienceAlert
This Physicist Says Electrons Spin in Quantum Physics After All. Here’s Why : ScienceAlert