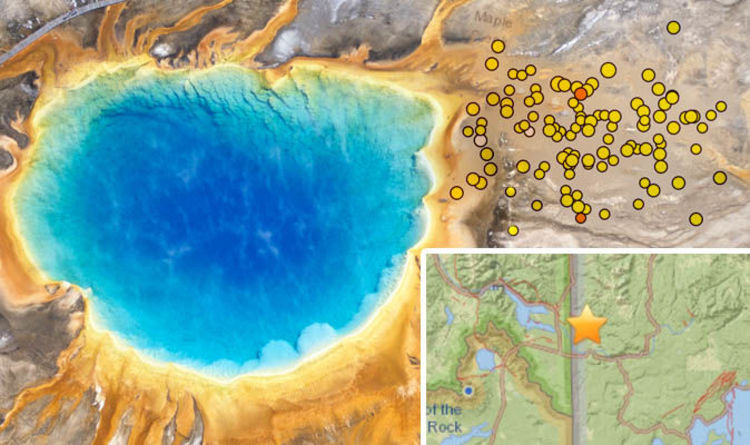 
More than 200 tremors have struck the Yellowstone supervolcano over the past few days.

The swarm of earthquakes began on February 8 and “increased markedly” on February 15, the US Geological Survey said.

Normally 1,500 to 2,500 tremors occur during a year and the latest quake in the swarm measured 2.9 in magnitude on the Richter Scale.

All the earthquakes have occurred about 8km (5 miles) below the surface.

Was there an earthquake tremor at National Park today?

Following on from the recent heightened activity, Yellowstone National Park received a slight jolt from a minor earthquake at 12.38am today, February.

The earthquake struck at a depth of 9km at 8.49am UTC but no one reported feeling the tremor, according to the USGS.

The largest historic earthquake in the region happened in 1959 at Hebgen Lake, which was located just west of the park boundary and north of West Yellowstone and measured magnitude 7.3 on the Richter scale.

It claimed the lives of 28 people and triggered a major landslide in Madison Canyon, which led to the creation of Earthquake Lake.

Are the Yellowstone earthquakes about to cause the Big One?

Although the earthquake swarm is recording higher than usual activity in Yellowstone, it is not the sign a major earthquake will follow according to Michael Poland, scientist-in-charge of the USGS Yellowstone Volcano Observatory.

“It experiences swarms all the time.” He said a region’s seismic history can provide clues for why a swam has occurred, adding the area, which is near Norris Geyser Basin, is usually extra “”.