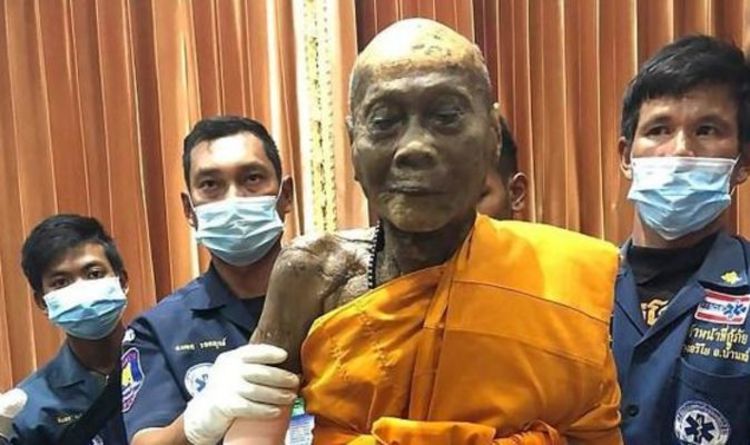 His body has been kept at the temple where he served in central Thai province of Lopburi.

However, this week when his followers removed his body from his coffin they were shocked to find his body had not decayed, and the monk appeared to be smiling.

Amazed followers snapped pictures of the incredible moment and shared it to social media.

Reports said the monks had removed his body in order to fit him with new, clean robes.

Rather than laying in there for two months, he appeared in a state consistent with somebody who had been dead for no more than 36 hours, reports added.

Pian’s peaceful state has been described by followers as a sign that the monk has truly reached Nirvana.

Nirvana is commonly associated with Buddhism and Hinduism.

It represents the achievement of a state of perfect quietude, freedom and euphoria and liberation from the repeating cycle of birth, life and death.

The monk’s followers will continue to pray for him until a final resting ceremony is held on the 100th day of his death.

He died after succumbing to illness in a hospital in Thailand’s capital of Bangkok.

Originally from Cambodia, Pian spent the majority of his life serving as a well-known spiritual and Buddhist guru in Lopburi.

His body was returned to the area following his death.

The Moon Stole Something From Deep Inside Earth Eons Ago, and Scientists Can Prove It : ScienceAlert
This Seemingly Simple Foot Feature May’ve Allowed Sauropods to Become Giants : ScienceAlert
A Common ‘Forever Chemical’ Has Just Been Linked to Liver Cancer in Humans : ScienceAlert
New Predictions Reveal The Fate of The World’s Biggest Ice Sheet if We Don’t Act : ScienceAlert
Robot Shows It’s Possible to Swim Through The Emptiness of a Curved Universe : ScienceAlert