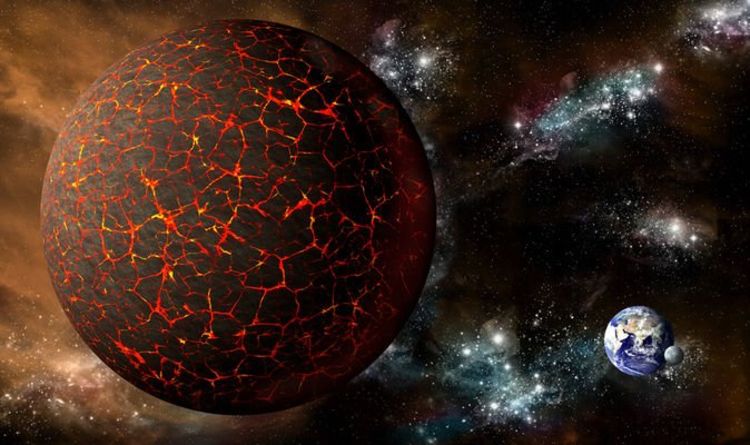 Nibiru, also known as Wormwood or Planet X, is a supposedly wayward planet, which destroys the Earth every 3,600 years or so. Conspiracy theorists widely touted Nibiru’s imminent arrival on September 23, 2017, after misinterpreting passages in the Bible’s Book of Revelation. Purveyors of the bizarre theory were proven wrong on the morning of September 24 but many still cling on to claims of the doomsday planet. Popular conspiracy theorist Gordon James Gianninoto is one of those who still believe Nibiru is coming for Earth.

Mr Gianninoto appeared on Coast to Coast AM radio, where he explained the effects Planet X’s arrival will have on our home-world.

Among other things, Nibiru’s crushing gravitational waves will flip the Earth’s poles and cause the world’s water levels to rise.

“When all the ice starts melting the oceans are going to come up 700ft.

READ MORE: Does this video show Planet X UFOs arrive for end of the world?

“Now you wouldn’t think because you’re on a boat on the equator and then you go to, let’s say Iceland, you’d think the water’s level the whole way.

“Then, when the pole shift happens, which wish is going to take one hour and Planet X is going to grab the Earth’s crust and slide it over the North Pole and then let go of it magnetically, the new North Pole is going to be the eastern tip of Brazil.”

Mr Gianninoto went on to claim Nibiru will then fly back into space and will not make another cataclysmic pass for another 3,600 years.

READ MORE: Do these photos show Planet X hiding behind the sun?

The conspiracist dubbed these cataclysmic claims “predictions’ but argued they are backed up by ancient prophecies of destruction.

He pointed to passages in the Bible, which speak of stars falling out of the heavens in the end days.

Mr Gianninoto said: “The tail of Planet X, it has a 20-stranded tail, so as it came through space it was a globe, it was a planet, and on either side, a tail stretching out with moons, and rocks, and volcanic dust and iron oxide and hydrocarbons.

“It’s a volcanic planet with huge rifts and it ejects stuff into the atmosphere and it goes into the tail.

READ MORE: Did the Sumerians predict the Planet X apocalypse?

“And then you’re going to see after Planet X goes by, there are going to be 700ft tidal waves going around the world and they will subside and every day the ocean will get six inches deeper.”

Then for up to three days after Nibiru passes the Earth, there will be a rain of space rocks “like nobody’s ever seen”.

But is there any scientific evidence to support the claim Nibiru or any other wayward planet is barreling through space at our planet?

Nibiru 2019: There is no evidence to support the Planet X haox (Image: GETTY)

Not according to the world’s leading scientists and astronomers at the US space agency NASA.

NASA’s Dr David Morrison said: “There is no credible evidence whatever for the existence of Nibiru. There are no pictures, no tracking, no astronomical observations.