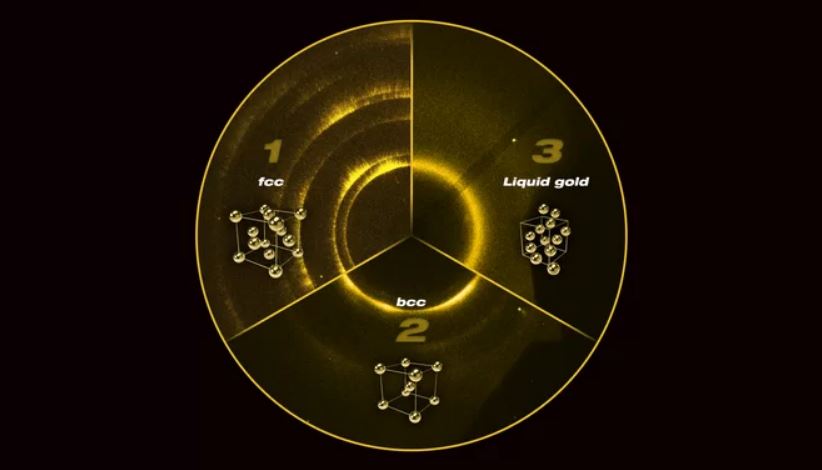 
A completely new form of gold has been created by US scientists.

The 21st-century alchemists used a high-energy laser, extreme temperatures and pressures as high as those found in Earth’s core.

Gold usually forms a crystalline structure that materials scientists call face-centered cubic (fcc in the picture). Imagine a cube like a die. Atoms would sit on each corner and each face.

In the lab experiments, When the gold was compressed rapidly at high temperatures, it formed what’s called the body-centered cubic (bcc in the picture) structure. This more-open structure packs atoms into a space in a less-efficient way, which means the gold doesn’t prefer to be in this form. If you were to imagine the die again, it would be as if atoms sat on each corner, with just one atom in the middle.

The team found that the structure of gold began to change from fcc to bcc at around 220 gigapascals (GPa), which is 2.2 million times our planet’s atmospheric pressure.

And when the researchers compressed the gold beyond 250 GPa to pressures equivalent to that found at the center of the Earth (around 330 GPa), it melted.

Of course, this gold will probably never create such nuggets… But hey who knows?

What’s incredible here is to understand that under extreme conditions, gold rearranges its atoms and forms a previously unknown structure. And when the pressures were pushed to the equivalent of those at the center of the Earth, the gold got even weirder… It melted. Alchemy is possible, when you have the right machinery to do it!

This Physicist Says Electrons Spin in Quantum Physics After All. Here’s Why : ScienceAlert
Scientists Create Shapeshifting Humanoid Robot That Can Liquefy And Reform : ScienceAlert
Newly Discovered Fossil Reveals Hundreds of Teeth ‘Never Seen Before in a Pterosaur’ : ScienceAlert
Hypertension Drug Shown to Extend Lifespan And Slow Aging in Animals : ScienceAlert
Mysterious Medieval City in Africa Had a Genius System to Survive Drought : ScienceAlert