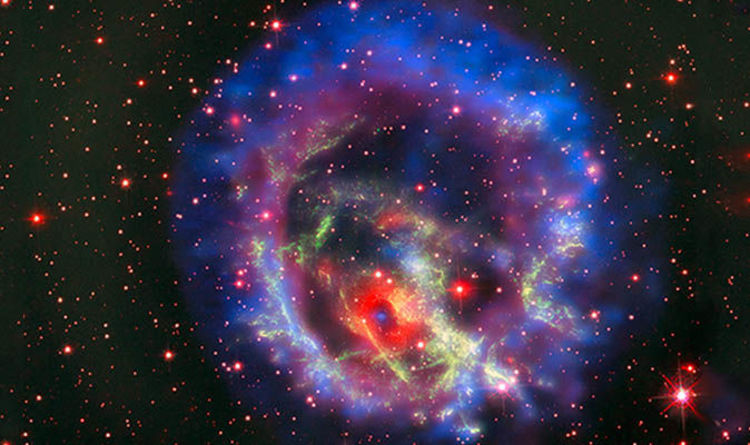 
The monstrous remains of a collapsed star stunned astronomers back on Earth who observed it for the first time on x-ray, radio and optical wavelengths.

The scientists have now revealed the rare stellar object, dubbed E0102, is of particular interest because it has a low magnetic field and no stellar companion.

Neutron stars are formed when star bigger than the sun collapse on themselves towards the end of their lifespans.

The collapsing stars then spectacularly erupt into a supernova.

Data collected by the Chandra telescope suggests E0102 formed some time about two millennia ago.

In a statement, NASA’s experts said: “Chandra observations of E0102 show that the supernova remnant is dominated by a large ring-shaped structure in X-rays, associated with the blast wave of the supernova.

“The new MUSE data revealed a smaller ring of gas that is expanding more slowly than the blast wave.

“At the centre of this ring is a blue point-like source of X-rays.

“Together, the small ring and point source act like a celestial bull’s eye.”

The US space agency said oxygen-rich supernova remnants like the neutron star are important for understanding how giant stars fuse lighter elements into heavier ones just before they erupt.

NASA said E0102’s x-ray signatures are similar to those of two other oxygen-rich supernova remnants – Cassiopeia A and Puppies B.

The neutron star discovery comes after scientists shed light on what was dubbed the fastest growing black hole in the known universe.

Dr Christian Wolf of the ANU Research School of Astronomy and Astrophysics said: “This black hole is growing so rapidly that it’s shining thousands of times more brightly than an entire galaxy.

“The heat radiation from the matter falling into the black hole, which is the light we see, is a few thousand times brighter than our own Milky Way galaxy.”

Change Doesn’t Happen Overnight, But Research Shows How Social Movements Succeed
Super Efficient Jellyfish-Inspired Robot Could Become a Restorer of Coral Reefs
Archaeologists in Turkey Have Discovered a Mysterious Ancient Kingdom Lost in History
Ingenious ‘Wrinkled’ Graphene Could Be The Most Promising Water Filter Yet
Your Body Makes 3.8 Million Cells Every Second. Most of Them Are Blood