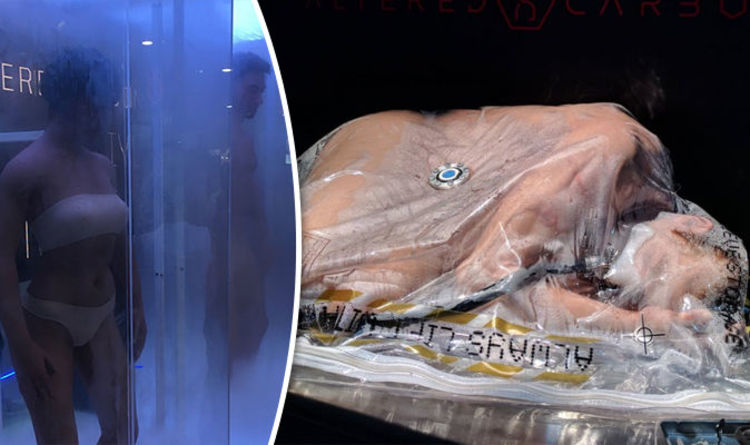 
The display caused unrest among passers-by attending CES in the Las Vegas Convention Center as murmurs of “I don’t like this” and “no, this is too much for me” could be heard from the crowd.

Allan Siriani, who was at the event, described it as “crazy” as exhibitors dressed in all white tried to sell the idea of immortality.

The exhibition claims to offer a plan to upload human consciousness to ‘human sleeves’ of whatever design you desire.

A guide, pointing to the ‘human sleeves’ which are inside the neon-backlit cases, told guests: “These are 100 percent genetically home-grown organic sleeves – the sleeve is your body.

“These are made of skin, tissue, muscle, bone, nervous system, cells, everything that we have to generate ourselves to make our movements, these are made up of.”

While it may appear disturbing the controversial display is actually part of a Netflix marketing scheme ahead of the release of its sci-fi show Altered Carbon.

Unlike the other booths at CES, none of the exhibitors at ‘Psychasec’ exhibition had name badges.

It reveals a future where people can live forever, exchanging old bodies for new ones, even switching genders.

An exhibitor added: “We’ve developed a way to put your consciousness into these sleeves. Now, these sleeves can be genetically designed to be whatever you like.

The system relies on what the Psychasec firm calls a “cortical stack” – a small device that is inserted into the base of the spine.

The stack then interacts with the nervous system, to “essentially download your memories, or you, onto this device like backup hard drive”, according to the Psychasec presenter.

Based on the novel by Richard K. Morgan, Netflix’s latest sci-fi show envisions a dystopian future where anyone can digitally transfer their mind into a new body.

At the end of the tour, CES attendees are shown the Altered Carbon trailer.

Altered Carbon will premiere on Netflix on February 2.

‘Gifted’ Dogs Seem to Have This One Characteristic in Common : ScienceAlert
Why Do Kids Get Worms, And What Can You Do to Prevent It? : ScienceAlert
These Asteroid Particles May Be Our Most ‘Pristine’ Sample of The Outer Solar System : ScienceAlert
Astronomers Charted The Sun’s Life, And This Is How The Story Ends : ScienceAlert
Plants Have Been Keeping a Secret From Us About How Thirsty They Actually Are : ScienceAlert