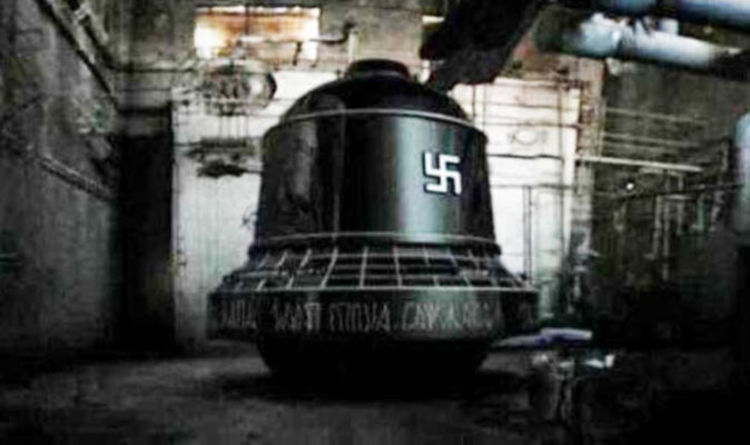 
The mysterious ‘Nazi Bell’ is said to have allowed the Third Reich to visit the Moon, Mars and even distant star systems by making use of an unexplainable, gravity-defying propulsion system, according to a conspiracy theory.

And a documentary has also suggested the anti-gravity technology, allegedly captured and tested by the United States after the war, was the ‘UFO’ people say they saw in the 1947 Roswell Incident.

Hitler is said to have ordered the development of the technology as part of a secret Nazi space programme.

Discussing the history behind the theory this week, John Goforth and Brent Hand from the Hysteria 51 podcast said: “As the walls begin to close in Hitler puts even more resources into his Wunderwaffe or Wonder Weapons.

“The prize of the lot? A bell-shaped machine potentially capable of destroying everything and everyone in it’s path or perhaps even altering time itself.

“But what happened to this secret Nazi project? Did it actually even exist?

“Was Hitler on the verge of using the Nazi Bell to change history forever and if so, where is it now?”

The Bell, known as ‘Die Glocke’ in German, is said to have been developed by a top team of scientists and engineers headed by SS General Hans Kammler.

Kammler also ran the Nazi’s secretive V-2 rocket programme, the world’s first working long-range ballistic missile which was used to terrorise London in the late stages of the war.

A 2014 German documentary on the Nazi Bell claimed the craft was initially designed to serve as a stealth fighter to counter the air superiority of the Allies.

The finished ship was said to be bell-shaped, around three metres in diameter and constructed from a copper-coloured material known as light metal, or ’leichtmetall’.

Powered by a mysterious red-hued fuel, which author Henry Stevens has claimed was red mercury, the flying saucer was reportedly capable of soaring from Earth.

After the Third Reich was defeated, the top-secret technology was allegedly captured by the US.

The documentary explored the possibility the 1947 Roswell Incident, which conspiracy theorists have insisted was an alien UFO cover up, was actually the the crash of a Nazi-era flying saucer.

The US military has always insisted the incident in New Mexico was simply a crashed weather balloon.