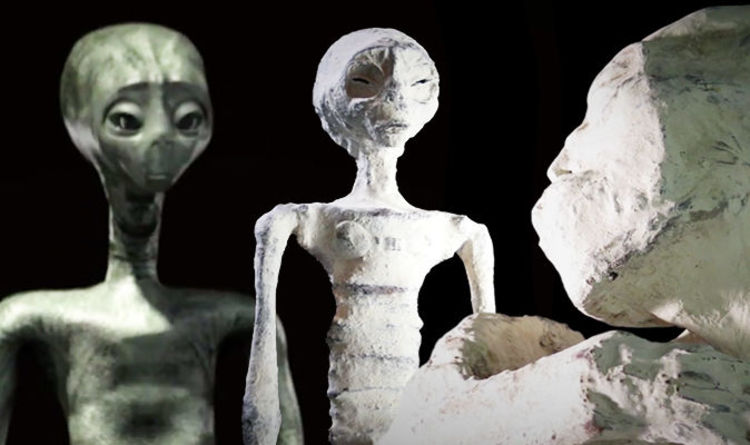 Scientists working on a project to prove that our ancient ancestors may have been visited by aliens have made the “world changing” claims in a video.

Mainstream scientists and archaeologists branded it a sick hoax, saying the bodies had been created using genuine mummified human remains from the area that had been dug up by grave robbers.

However, a team of researchers and scientists working with conspiracy theory website Gaia.com have continued to examine the corpses and claim they have now proved they are not reconstructed hoaxes, and the creatures once walked the Earth as they appear.

The most bizarre mummies are three short humanoids, said to have reptilian skin, alien-like heads, and three fingers and toes.

Dr Raymundo Salas Alfaro, a Peruvian radiologist, who is part of the team, has put his reputation on the line to say they were once alive, after looking at CAT scan results.

He said: “Each of three small specimens has been analysed and bone density belong to that of a living being.

“The preservation is amazing, it is really surprising, especially the bone parts of these small creatures.

“You see that, the base of the skull has its own characteristics.

“We can scientifically prove the skull of these creatures have a cranial cavity similar to humans, but they have some strong differences.


Here another image you see the soft tissue – a big surprise about these small creatures. Of course they have existed this is not a fake.


“Look, the cranial vault and part of the brain – this is the base of the skull of this specimen. This is the neck and the back bone these are the collar bones and the thoracic cavity.

“Here another image you see the soft tissue – a big surprise about these small creatures.

“Of course they have existed this is not a fake.”

Another scientist, who is pat of the team making bold claims, is Dr Konstantin Korotkov, Deputy Director of Saint-Petersburg Federal Research Institute of Physical Culture, in Russia.

He looked at a larger mummy with a strange head and three finger sand toes that has been named Maria.

The expert said: “In our research with Maria we have had several steps.

“The first step was to prove it was real and not plastic, not paper.

“Next, that it was ancient. We did carbon dating and did analysis on the structure of the body.

“The CAT scan has proven it was a real body.

“What about the three fingers and three toes? Maybe this is not real and is attached somehow.”

However, he said tests showed the hands and feet shared the same chemical composition, the same DNA, and were the same age.

He added: “There is no doubt the three fingers and three toes belong to this body.

“So it was proven that it is real.”

Dr Korotkov is no stranger to the fringes of science and claims to have previously photographed a soul leaving a human body.

Turning to Maria, Dr Salas Alfaro said: “We are scientifically proving that this is a real body that was once alive.”

Jamie Mausaan, a Mexican journalist on the team, described what was discovered as “world changing.”

He said: “We can prove we have two different types of being – one human sized, and virtually the same except the head, hands and feet, and the other completely different, more like a reptile

“We have reptile like skin. We will take new CAT scans and X-rays to find out the reality of this finding.

“If they can be proved to be real we have six bodies of the same kind – enough evidence to consider this case real.”

Most people believe the mummies have been hoaxed.

Initial DNA tests found them to be 100 percent human, according to a report from Paleo DNA laboratory at Lakehead University, Ontario, Canada, now available online.

It said: “The evidence suggests the source of DNA from the biological material from the cranial brain and the bone extracted from the hand belongs to homo sapiens (humans).”

The bodies were carbon dated to between 245 to 410 AD, but genuine scientists believe they have been created to look like aliens using the “grave-robbed” mummified remains of anciently-buried humans.

The organisers of the ninth annual World Congress on Mummy Studies, which took place in Lima, Peru, last August, issued an angry call on Facebook for an official inquiry into whether archaeological crimes have been committed.

Commenting on the DNA results, British UFO investigator Nigel Watson said: “It shows it has a male human skull and hands. Another fake bites the dust.”

Minor Google Meltdown Exposes The World’s Utter Reliance on a Single Tech Company
The Moon Stole Something From Deep Inside Earth Eons Ago, and Scientists Can Prove It : ScienceAlert
This Seemingly Simple Foot Feature May’ve Allowed Sauropods to Become Giants : ScienceAlert
Astronomers Charted The Sun’s Life, And This Is How The Story Ends : ScienceAlert
Deep-Sea Sponges Can ‘sneeze’ Out Mucus, and The Footage Is Weirdly Mesmerizing : ScienceAlert