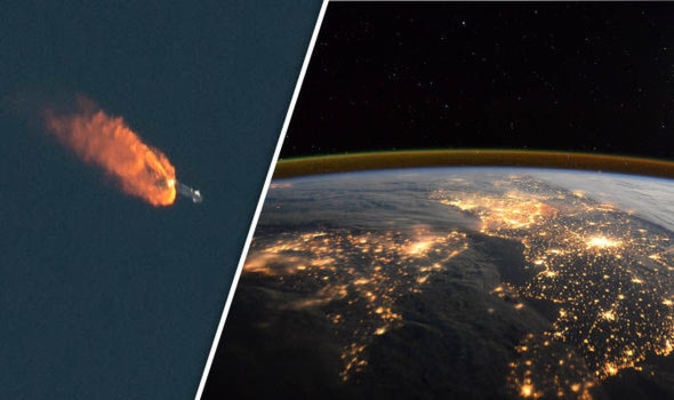 
The American space agency is working with a host of other countries on an urgent mission to find ways of redirecting the giant flying rocks  away from civilisation.

Meteors can travel at unimaginable speeds and, irrespective of size, carry enough kinetic energy to punch holes in cities.

NASA puts the average speed of an asteroid at around 60,000mph. But the recently-spotted ‘Oumuamua,’ a cigar-shaped asteroid form outside our solar system reached a peak speed of 196,000mph (87.3 km/s).

A collision at that speed would have the destructive impact of a large nuclear warhead.

A meteor close to the Yukon Peninsula, Mexico, famously killed off the dinosaurs 65 million years ago after the resulting ash cloud triggered the equivalent of a nuclear winter.

Along with the hundreds of asteroids already orbiting dangerously close to the planet, scientists anticipate many more will be discovered over the next few years.

To tackle the growing amount of flying space debris, NASA has launched a robotic mission (the Asteroid Redirect Mission ARM) to visit a large near-Earth asteroid to remove some of its mass and redirect it into a stable orbit around the moon.

NASA will use further missions study the velocity, orbit, size and spin of asteroids before deciding whether they can be redirected. But the agency has so far found just four flying rocks it thinks it can divert.

The missions to collect a multi-tonne boulders from the surface of asteroids will see robots launched into space to perform the task while other missions will be crewed by astronauts.

The agency is also hoping its planet-saving missions will give further clues to the origins of the universe.

Asteroids are left-over materials from the solar system’s formation and NASA said: “Astronauts will return to Earth with far more samples than have ever been available for study, which could open new scientific discoveries about the formation of our solar system and beginning of life on Earth.”

The agency hopes the missions will also help it prepare for a mission to Mars.

NASA’s call for help with its missions comes as an asteroid known as 2016 SR2 skimmed perilously close to Earth last week.

In the last fortnight, several meteors have also been spotted coming dangerously close to Earth including in Queensland and across the US.