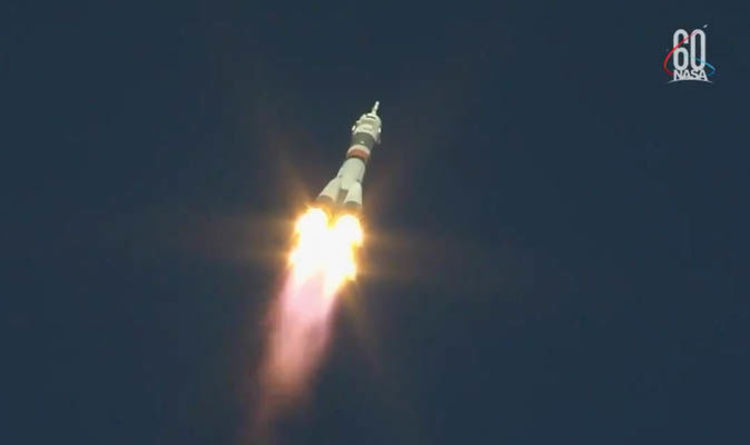 The US space agency has now confirmed the ISS crew members were intercepted by search and rescue operations.

The two astronauts are in good condition despite the dire mission-failure.

They have now exited their emergency landing capsule.

NASA said: “The search and rescue teams have reached the Soyuz spacecraft landing site and report that the two crew members are in good condition and are out of the capsule.

“Search and rescue teams are with the crew now.”

The two astronauts blasted off towards the ISS today from the Baikonur Cosmodrome in Kazakhstan, in a Soyuz MS-10 type rocket.

The liftoff, broadcast live over the internet, took off into space around 8.40am UK time.

Shortly after launch, NASA reported an issue with one of the rocket’s booster engines.

NASA said: “There’s been an issue with the booster from today’s launch. Teams have been in contact with the crew.

“Teams are working with our Russian partners to obtain more information about the issue with the booster from today’s launch.

“The crew is returning to Earth in a ballistic descent mode. Teams are working to obtain additional information from our Russian partners.”

Mr Hague and Mr Ovchinin were forced to return to Earth in a ballistic decent at a sharper decline for landing than usual.

NASA said in a statement: “The Soyuz MS-10 launched from the Baikonur Cosmodrome in Kazakhstan to the International Space Station at 4:40 a.m. EDT Thursday, October 11 (2:40 p.m. in Baikonur).

“Shortly after launch, there was an issue with the booster.

“Teams have confirmed the spacecraft separated from the booster and are in contact with the crew as the capsule returns in a ballistic decent mode.”

At the time of launch, NASA said the ISS was flying over Kazakhstan at 254 statute miles.

The astronauts were tasked with carrying out hundreds of experiments in biotechnology and physical sciences.