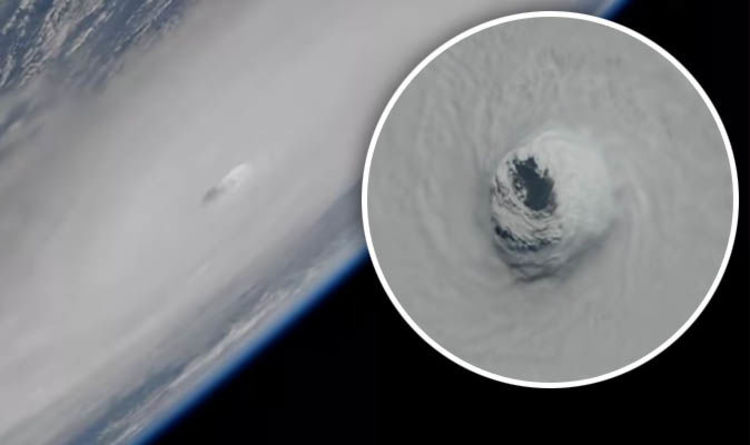 
The incredible Hurricane Michel video shows the unimaginable scale and intensity of the hurricane as it pushes into mainland USA.

The Category 4 cyclone made landfall in Florida on Wednesday, October 9, but has since been downgraded to a tropical storm.

Michael is now pushing maximums sustained winds of 50 mph and is moving at a speed of 21 mph.

The storm is the first hurricane of this intensity to strike the area since records began in 1851 and the third most powerful to ever strike the US.

NASA said: “Cameras outside the International Space Station captured views of Hurricane Michael at 12.58pm EDT October 10 from an altitude of 255 miles as the storm made landfall as a Category 4 hurricane over the Florida panhandle.

“The National Hurricane Center reported maximum sustained winds near 150 mph with the potential to bring dangerous storm surge and heavy rains to the Florida panhandle area.”

The hurricane tore through Florida with powerful winds, uprooting trees, shredding roofs and turning over cars.

According to Data Fusion Solutions, more than 508,000 residents have been left without power across Florida, Georgia and South Carolina.

Hurricane Michael has so far killed two people under fallen trees, one of which was a child.

And the storm is now pushing further inland – threatening the Carolinas and Virginia.

The Governors of North and South Carolina have warned local residents to brace for impact in the region.

Ground observations suggest the hurricane is weakening as it pushes forward but a number of weather watches and warnings are still in effect.

At 10am BST (5am EDT) the National Hurricane Center (NHC) tracked the eye of the storm approximately 30 miles west of Augusta, Georgia, and 90 miles northeast of Macon, Georgia.

A storm surge warning for the Gulf coast of Florida has been discontinued and a tropical storm warning is no longer in effect along the Georgia and Florida coast south of Altamaha.

A tropical storm warning is now also in effect for Altamaha Sound, Georgia, to Duck, North Carolina, and Pamlico to Albemarle Sounds.

The NHC said: “Michael should continue to weaken for the next 12h or so as the centre moves through South Carolina and into North Carolina.

“After that time, the cyclone should start to intensify due to baroclinic forcing, and it is expected to become a gale – or storm-force extratropical low around the 24h point.

“The new intensity forecast is an update of the previous forecast, and it leans heavily on global model guidance during the extratropical phase.”

Heavy rainfall from the hurricane is expected to produce dangerous flash-flooding over swathes of Georgia, the Carolinas and southeastern Virginia.

Tropical storm condition will continue to batter parts of the US southeast coast from Georgia through to North Carolina.