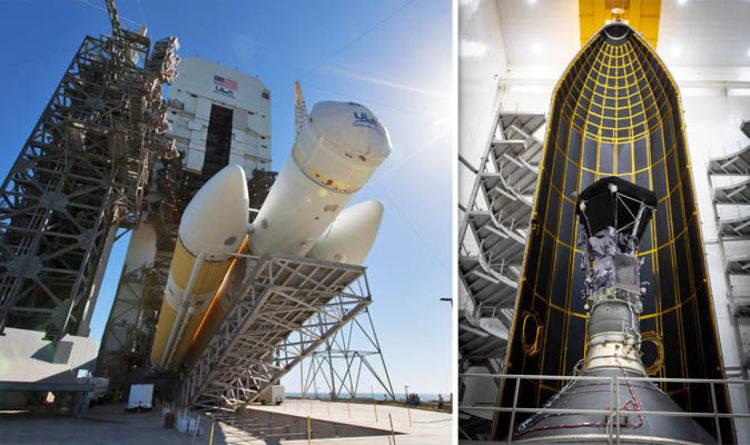 
The US space agency pencilled in a launch period for the solar probe between July 31 and August 23, 2018.

And now NASA has confirmed it will make its first attempt to blast the probe into space in the morning hours of Saturday, August 11, Eastern Time.

A 45 minute launch window will open for NASA at 3.45am EDT (8.48am BST) at the Cape Canaveral Air Force Station in Florida.

Weather permitting, the Parker Solar Probe will set off on an incredible journey through space to the beating heart of the solar system.

The solar probe will hurtle through the vacuum of space at speeds of 430,000 mph (700,000 kph) – fast enough to to cover the distance between Philadelphia and Washington DC in just one second.

At its closest approach to the Sun, the Parker Solar Probe will have to withstand intense temperatures and radiation blasting the spacecraft at 2,500 F (1,377 C).

NASA said: “The spacecraft and instruments will be protected from the Sun’s heat by a 4.5-inch-thick (11.43 cm) carbon-composite shield, which will need to withstand temperatures outside the spacecraft that reach nearly 2,500 F (1,377 C).”

The solar probe will fly to the Sun’s atmosphere as close as 3.8 million miles (6.1 million km) from the star’s surface, within the orbit of the planet Mercury.

The distance is more than seven times the current record holder for a close solar approach – the Helios 2 spacecraft came within 27 million miles (43.4 million km) of the Sun’s surface in 1976.

The goal of the Parker Solar Probe mission is to study the Sun and its atmosphere up close.

NASA said: “The primary science goals for the mission are to trace how energy and heat move through the solar corona and to explore what accelerates the solar wind as well as solar energetic particles.

“Scientists have sought these answers for more than 60 years, but the investigation requires sending a probe right through the 2,500 degrees Fahrenheit heat of the corona.

“Today, this is finally possible with cutting-edge thermal engineering advances that can protect the mission on its dangerous journey.”

The space probe will carry four main instruments for its research on the star.

The Parker Solar Probe is armed with instruments ready to study magnetic fields, plasma and energetic particles and will capture detailed images of solar winds trailing from the Sun.

The probe is expected to reach the Sun approximately three months after launch and the mission will last a total of period seven years.

During brief science data downlink periods, the space probe will beam information back to Earth for 10 to 24 hours a day.

You can watch the NASA probe launch here on Express.co.uk on the day of the launch, courtesy of NASA TV.

NASA TV is the space agency’s around-the-clock educational broadcasting available to stream online and on terrestrial TV in the US.