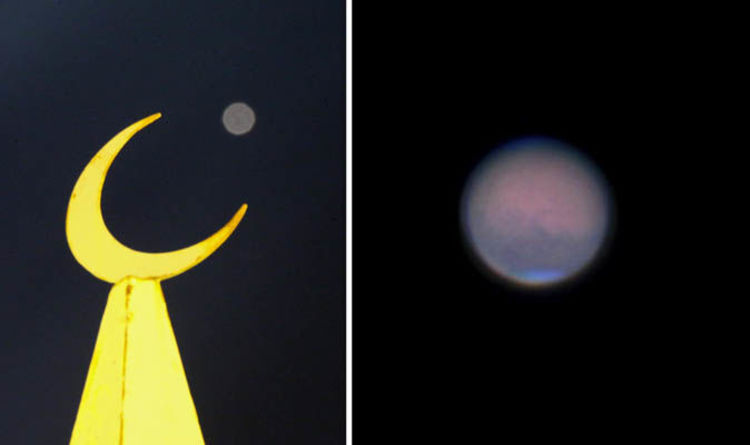 
Mars reached opposition with Earth on July 27 and came strikingly close to Earth on the night of July 30 and July 31.

On the night of the approach, the dusty Red Planet came within 35.8 million miles of Earth – the closest the planet has been to our home world in 15 years.

At the peak of the approach Mars was extremely visible in the night sky, standing out against the myriad of stars with its characteristic red glow.

The Red Planet shined with a magnitude of 2.8 which is near twice as bright as Jupiter – the largest planet in the solar system and the fourth brightest object seen from Earth.

Thankfully if you missed the Red Planet at night in July, Mars will remain incredibly bright and easy to spot for the remainder of the month.

According to TheSkyLive.com online star chart guide, the Red Planet is visible to the naked eye tonight, shining at a magnitude of -2.69.

Mars can be found below the horizon in the Constellation Capricornus, when seen from the UK.

The Red Planet will be up all night and roughly sit directly opposite the Sun.

Mars will be seen from about 8.43pm BST and will disappear below the horizon around 3.44am BST.

You can spot the Red Planet at an altitude of -51 degrees in an east-northeast 65 degree direction.

Astronomer Justin Davenport took a photo of the glowing red disk above the Earth on the night of Saturday, August 4.

Sharing his photo of Mars on Twitter, Mr Davenport said: “I got this IR plus RGB shot of Mars very early this morning with the ZWO ASI 120mm-s and the photographic filters plus the C8 and 1.5x Barlow lens. Enjoy!”

Mr Davenport posted another photo of Mars, tweeting: “WhileI’m on the subject of Mars, I got this IR plus RGB shot – without Barlow – of the Red Planet on the early morning of August 4th with the same equipment I described in my last tweet.

“I will be buying a filter wheel in the not distant future.”

Tony Coleby, @TonyColeby, tweeted a picture of the distant Red Planet shining brightly in the starry field of the night sky.

“Astrophotography on the cheap. inspiring.”

Another stunning photo of Mars was taken on late August 3 from the Tauxigny observatory in Central France.

The photo is a long exposure of the Red Planet streaking across the sky in a continuous line.

Astronomers Think They Know The Reason For Uranus’s Kooky Off-Kilter Axis : ScienceAlert
Superconductivity Model With 100,000 Equations Now Contains Just 4 Thanks to AI : ScienceAlert
Amazing New Fossils Provide Earliest Known Traces of The Evolution of Our Jaws And Limbs : ScienceAlert
Hubble And Webb Pics Reveal DART Impact Was Even Bigger Than Expected : ScienceAlert
Secret Clues in Tutankhamun’s Tomb Reignite The Idea That Nefertiti Is Hidden Nearby : ScienceAlert