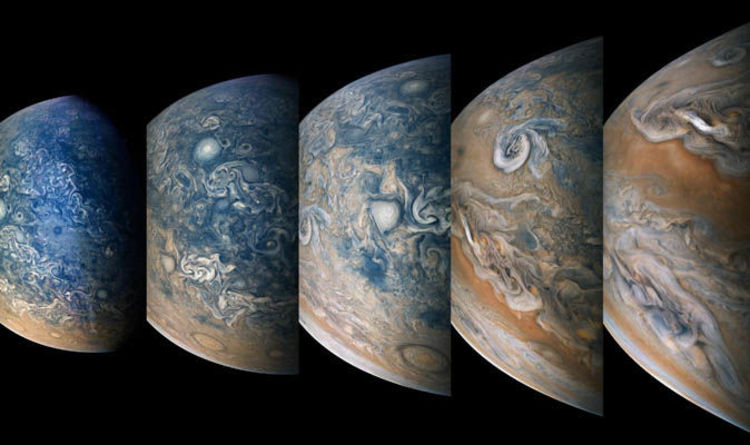 
The colourful enhanced photographs show the planet’s Northern Hemisphere observed over a period of just 17 minutes.

During the 17 minutes Juno spent orbiting the gas giant, the NASA spacecraft witnessed a weather phenomenon dubbed an anticyclone.

Anticyclones are described by the US National Weather Service as a “large-scale circulation of winds around a central region go high atmospheric pressure.”

Perhaps the most famous anticyclone in the solar system is Jupiter’s so-called Great Red Spot.

The monstrous swirling storm is very much similar to an earthly hurricane but much larger – about twice the size of Earth.

This particular anticyclone in the NASA pictures was dubbed N5-AWO.

NASA said: “An anticyclonic white oval, called N5-AWO, can be seen at centre left of the first image at the far left and appears slightly higher in the second and third images.”

If you look closely at the picture you will also spot a Jovian tempest dubbed the Little Red Spot towards the bottom of the first three pictures.

The Little Red Spot is a storm very similar to its bigger namesake and is a massive, counterclockwise rotating storm in the Southern Hemisphere.

The last two pictures snapped by Juno feature a reddish-orange band of colour known as the North Temperate Belt.

The US space agency said: “It rotates in the same direction as the planet and is predominantly cyclonic, which in the northern hemisphere means its features spin in a counter-clockwise direction.”

The photos were taken by Juno’s JunoCam imager but the colour-enhanced pictures seen here today were meticulously processed by citizen scientists Gerald Eichstädt and Seán Doran.

All Jupiter pictures snapped by the Juno mission are readily available to browse through online.

NASA strongly encourages members of the public to download, enhance, process and share their takes on Juno’s photos.

Every once in a while, NASA’s team of scientists will select the most stunning processed picture they come across and share it with the world.

If you are lucky enough, you might even have one of you own Juno pictures selected for recognition.

Minor Google Meltdown Exposes The World’s Utter Reliance on a Single Tech Company
A Common ‘Forever Chemical’ Has Just Been Linked to Liver Cancer in Humans : ScienceAlert
Extreme Drought in Italy Reveals Hidden Bomb Submerged in River Since WWII
New Predictions Reveal The Fate of The World’s Biggest Ice Sheet if We Don’t Act : ScienceAlert
This Artificial Synapse Can Run a Million Times Faster Than Ones in The Human Brain : ScienceAlert