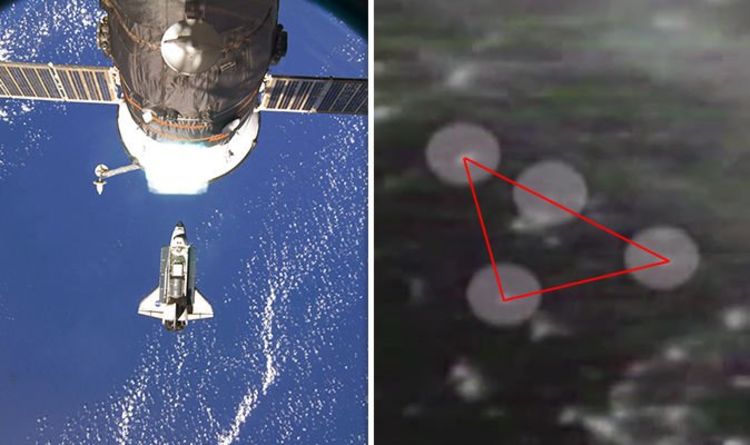 
NASA launched the STS-106 spacecraft from the Kennedy Space Centre on September 8, 2000. The object of the mission was to fly Space Shuttle Atlantis to the International Space Station in preparation to permanently man the low-orbit satellite. However, there was one moment that stuck out for conspiracy theorists.

Avid sky watcher and presenter Jeff Challender detailed on the 2017 show: “STS-106 was the second-to-last mission to an unmanned space station.

“A single spacewalk was carried out by cosmonaut Yuri Malenchenko and astronaut Edward Lu.

“The two spacewalkers made the final cable connections between the Zarya module and the brand new service module, named Zvesda.

“The crew also activated the toilet facilities about Zvesda.”

Mr Challender went on to detail the strange event that took place on September 18, 2000.

He explained: “At approximately 9:47pm, the camera was pointed in a southwesterly direction towards Canada.

“The crew was busy preparing to land the next day and exchanged verbal messages from time to time.

“But as the ISS camera panned, four anomalies were spotted flying in a perfect triangle.

“These objects were travelling between the shuttle and the surface of Earth.”

The claims sparked a conspiracy frenzy but debunkers were quick to claim there was a simple solution, stating they were a trio of Navy satellites.

He added: “There is no way these objects could be the US Navy’s NOSS Triplets.

“This is impossible because Atlantis was orbiting at 240-plus miles above Earth.

“The Triplets orbit at some 750 miles.

“For this reason alone, this is not the answer.”

Landmark Discovery as Ancient Aboriginal Sites Found Underwater For First Time
Ancient 12,000-Year-Old Mine Discovered in Underwater Caves on Mexican Coast
Fake Accounts Are Constantly Manipulating What You See on Social Media. Here’s How
Astronomers Reveal Glorious Catalog of Objects That Could Host Alien Intelligence
These Eerie Creatures Could Be The First Known Amphibians With a Venomous Bite