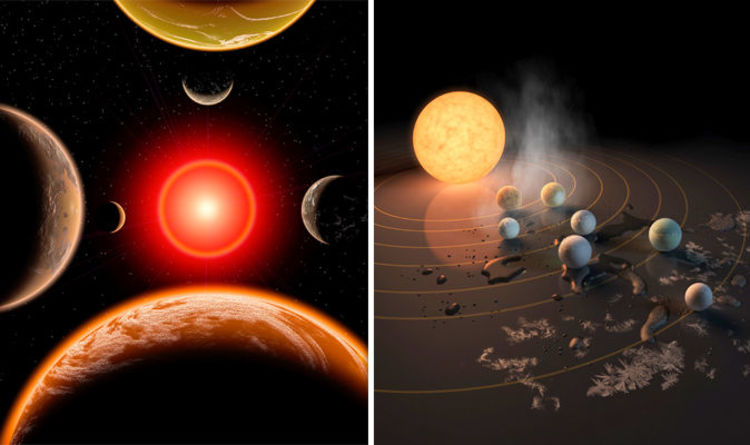 The series of seven planets, that are each labelled with a letter, could have the fundamentals needed to support alien life.

When the system was found, scientists described it as a “holy grail” discovery.

TRAPPIST-1d and TRAPPIST-1e, the third and fourth planets sitting away from the system’s sun, are “the most likely to have liquid water on them”, according to Simon Grimm, an astronomer for the Center for Space and Habitability at the University of Bern in Switzerland.

Planet E is said to be most similar to Earth because it “receives the same amount of energy from its star that Earth receives from the Sun”, according to the astronomer.

He went on: “It has the best scenario for life. Imagine an ideal planet and it would probably look like that.

“Quite amazing. That’s really a lot of water.

“We’re not completely sure water is there, but it’s a plausible scenario.”

The planets are believed to be rocky in the same way as Earth and orbit a red-dwarf star that is only 9 per cent as large as the Sun.

The new findings come partially from NASA’s Kepler and Spitzer telescopes that have the power to see into the deep and dark corners of space.

Some of the worlds are understood to contain water at as much as 5 per cent of their mass.

This would be a gigantic leap from Earth that his only 0.02 per cent ocean.

D and E have the greatest chance of supporting life due to their placement in the middle of the system.

Dr Amaury Triaud, from the University of Birmingham, who was a leading member on the team helping with the study, said: “Of the seven planets, and of all the exoplanets that have been identified so far, Trappist-1e is the most resembling Earth, when we consider the amount of energy a planet receives from its star, and its density, which reflects its internal composition.

“As our next step, we would like to find out whether the planet has an atmosphere since our only method to detect the presence of biology beyond the solar system relies on studying the chemistry of an exoplanet’s atmosphere.”

This allows the planet to not be too hot or too cold, meaning water has the greatest chance of being like that from Earth.

Mr Grimm claimed that B and C are most likely to have “gaseous” water thanks to their closer proximity to the sun.

Meanwhile, F, G and H are the coldest planets and are expected to have water “in the form of ice”.

Despite the emerging signs of water, it is not yet known whether oxygen is present on planets in the system. 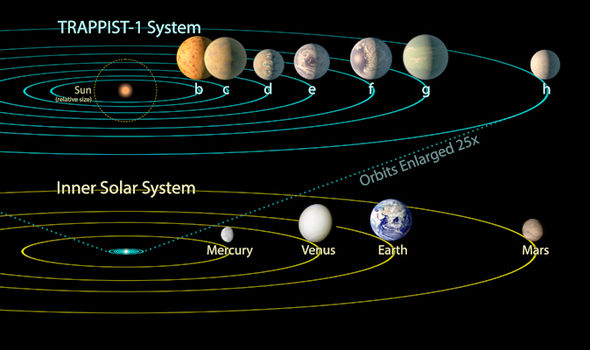 Mr Triaud said: “Oxygen is not required for life to exist, however, if present oxygen gas is useful to reveal that biological processes such as photosynthesis are active.

“The vast amount of oxygen on Earth appeared a long time after life first emerged.

“When astronomers refer to life, we often mean any sort of organism, including micro-organisms and plants, which are the living beings that have most profoundly changed the chemistry of our atmosphere. 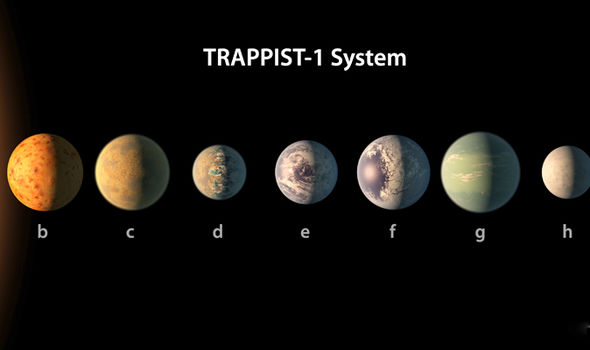 When the system was found, scientists described it as a ‘holy grail’ discovery

“For instance, it is harder to breath atop mountains.”

In an attempt to analyse the atmospheric compositions of the TRAPPIST-1 planets, NASA will launch a new space telescope dubbed the James Web next year.