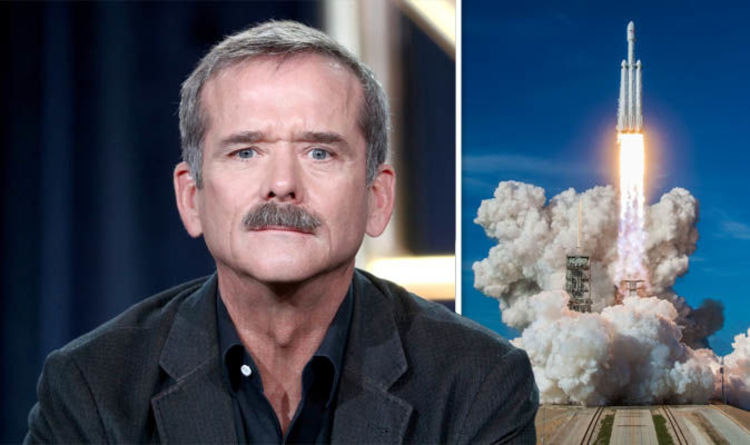 
The retired Canadian astronaut who charmed the world with his David Bowie covers sung aboard the International Space Station (ISS) is sceptical about humans reaching Mars.

Speaking about the possibility of astronauts setting foot on the dusty planet, the Mr Hadfield said neither of the three big rocket companies have the technology needed to accomplish the feat.

He said: “Personally, I don’t think any of those three rockets is taking people to Mars.

“I don’t think those are a practical way to send people to Mars because they’re dangerous and it takes too long.”

In November 2015, NASA administrator Charles Bolden confirmed the US space agency’s commitment to reaching Mars by the year 2030.

The first leg of the progress involves sending an unmanned rover to Mars by 2020, followed by a manned mission a decade later.

In 2016 Mr Musk was positive he could drop a Dragon 2 lander on Mars in 2018 but the plans were somewhat delayed by the development of the BFR rocket – SpaceX’s most powerful spacecraft to date.

The South African billionaire teased again in May this year SpaceX landers will reach Mars by the year 2022.

He said: “We are building the first Mars or interplanetary ship right now.”

Jeff Bezos, the man behind the global powerhouse that is Amazon, also eyed up the potential of sending spacecraft to Mars with his rocket company Blue Origin.

But Mr Hadfield is not entirely convinced the combined ambitions and financial might of the three institutions is enough to overcome the dangers of a Mars mission.

The astronaut said: “We could send people to Mars, and decades ago — I mean, the technology that took us to the moon and back when I was just a kid, that technology can take us to Mars, but it would be at significant risk.

“The majority of the astronauts that we send on those missions wouldn’t make it; they’d die.

“Because the technology is still quite primitive.”

The biggest risks include the threat of space radiation, starvation, technical failure and a myriad of other hazards in the depths of space.

Even Mr Musk conceded two years ago the risks of going to Mars are “very dangerous” and the possibility of fatality is a stark reality.

As it stands Mr Hadfield thinks engineers and astronauts will have to develop new exciting technology that can overcome the limitations of rocket-propelled spacecraft.

The astronaut said: “Maybe the work that’s going on with the Alpha Magnetic Spectrometer on the space station and in the particle accelerator in CERN and other places is going to show us how we can harness gravity.

“It sounds outlandish, but we figured out how to harness electricity and what electrons do, and that seemed crazy, and it’s revolutionised life and travel. So who knows?”

A ‘Wormhole’ Built on a Quantum Computer Teleported Information as Predicted : ScienceAlert
Earth’s Oxygen Came From an Unexpectedly Deep And Hot Source, Study Suggests : ScienceAlert
Lyme Disease Is on The Rise, But There Might Be Hope in a New Vaccine : ScienceAlert
These Mysterious Fungi Belong to an Entirely New Branch on The Tree of Life : ScienceAlert
Astronomers Spot The Biggest Galaxy Ever, And The Scale Will Break Your Brain : ScienceAlert