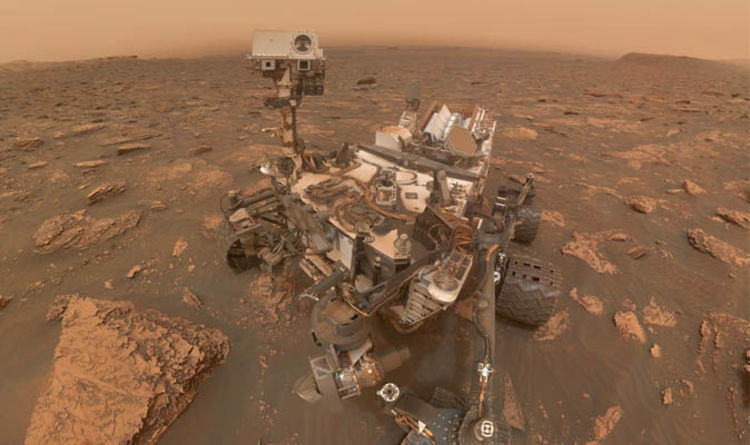 The photo was processed and shared online by NASA enthusiasts and citizen scientist Sean Doran.

The raging storm is one of the biggest and most intense dust storms seen on the surface of Mars in many years.

NASA scientists who observed the first inklings of the storm on May 30, said it had the potential to cloud the entire planet.

The Curiosity selfie now shows the thick cover of swirling dust blocking out the sky and background behind the rover as it approaches.

On Thursday, June 14, NASA’s Opportunity rover was forced to hunker down its power systems and weather out the storm.

With the dust storm blotting out the skies completely, the solar panel powered rover had no other option but to power down and preserve energy.

The Martian dust storm has since completely blocked out all sight of the planet’s surface from orbit.

He said: “Thanks to the ongoing Mars Exploration Program, Mars is being monitored by a series of spacecraft orbiting the planet on essentially a daily basis for nearly 20 years.

“Planet encircling storms were observed in 2001 and 2007, however in the five Mars years since then, no regional storm has grown to planetary scale but the current storm on Mars is just days away from meeting that classification of a planet-encircling dust event

But thankfully for NASA, the Curiosity rover is powered by a nuclear plutonium core, which generates electricity from the heat it radiates.

The nuclear core can provide the rover with up to 14 years of continuous power.

The Mars Curiosity rover landed on Mars in August 2012 after blasting off from Earth in 2011.

The NASA rover is now drilling rock samples in the Gale Crater, hunting for signs of ancient biological life on Mars.

Once drillings complete, the rover will attempt to scale the Aeolis Mons mountain – a 5.5km (18,000ft) high mountain forming the ridge of the Gale Crater.

On June 7 this year, NASA spectacularly announced Curiosity had discovered organic compounds in the rock samples it had drilled out.

The discovery was touted by NASA’s space boffins as the “Holy Grail” in the hunt for extraterrestrial life.