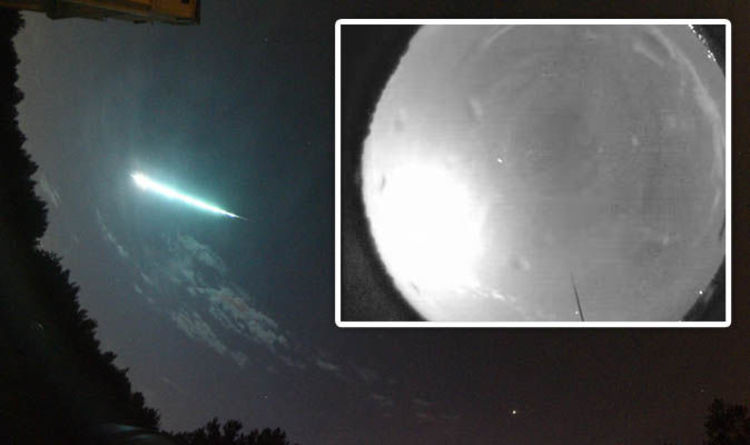 
The burning meteor dubbed the “Alabama fireball” by NASA, left a fiery trail over Turkeytown, Alabama, in the early hours on Friday, August 17.

The fireball was caught streaking across the sky by NASA’s Meteor Watch just after midnight around 12.19am local time.

The Alabama meteor was first spotted at a low attitude of 58 miles (93 km) above the town.

At its brightest, NASA said the meteor shined 40 times brighter than the Moon.

The USA-based space agency estimated the space rock zoomed across the sky at an incredible speed of 53,700 mph (86,422 kmh).

Soon after being spotted, the meteor erupted over the neighbouring town of Grove Oak.

The meteor was filmed by six of NASA’s cameras in the region.

The space agency said: “Analysis of the data indicates that the meteor was first seen at an seen at an altitude of 58 miles above Turkeytown, Alabama, northeast of Gadsden, moving west of north at 53,700 miles per hour.

“It fragmented some 18 miles above the small town of Grove Oak.”

After the meteor disintegrated, NASA evaluated the probability of the fireball producing meteorite impacts in the surrounding area.

NASA said: “Whether it did or not, it was an extremely bright event, seen through partly cloudy skies and triggering every camera and sensor operated bye the Meteoroid Environment Office in the region.”

Jessica Kilgore posted on the NASA Meteor Watch Facebook to say her husband saw the meteor fly over her house about the time NASA spotted the fireball.

Mrs Kilgore said her husband likened the sound of the passing meteor to the sound of “thunder off in the distance”.

She wrote: “After doing a bit of research, I found this page and the information you shared lines up perfectly with what he described. Very cool.”

Planet Earth is constantly bombarded by bits and pieces of space rock, debris and other stellar objects on a daily basis.

Anywhere between 90 to 95 percent of these objects disintegrate in the atmosphere before reaching the ground but occasionally a meteor makes its way through.

Earlier this month astronomers worldwide watched hundreds of meteors burst out during the peak of the annual Perseid meteor shower.

During the shower’s peak, as many as 60 to 70 meteors an hour streaked across the night skies.

‘Unbelievable’ Video Shows 2 Bees Working Together to Open a Soda Bottle : ScienceAlert
New Discovery Means Parkinson’s Could Be Diagnosed With a Swab in Just 3 Minutes : ScienceAlert
Astronomers Think They Know The Reason For Uranus’s Kooky Off-Kilter Axis : ScienceAlert
We May Finally Know Why Oceans in The Southern Hemisphere Are Getting So Warm : ScienceAlert
The Pacific Is Destined to Vanish as Earth’s Continents Meld Into a New Supercontinent : ScienceAlert