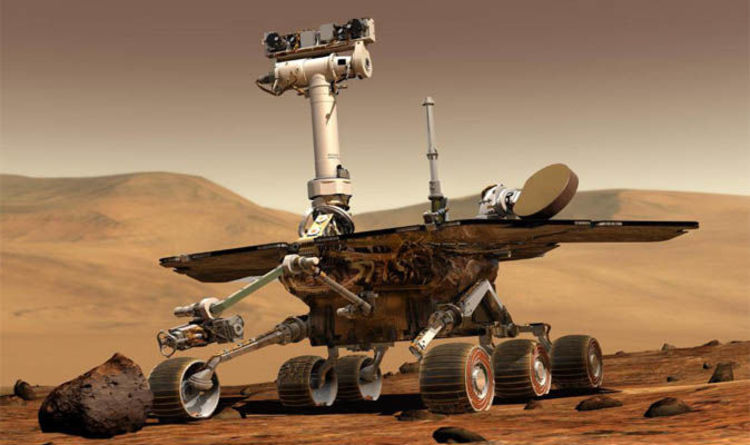 
Earlier this month on August 4, NASA’s engineers blasted Wham!’s hits single Wake Me Up Before You Go-Go in a dire attempt to awaken the powered down robot.

The Opportunity rover was forced to go into low power mode last month for an unknown amount of time when a planet-sized dust storm took over Mars.

NASA’s engineers have been out of contact with the rover since June 10 and it could be weeks or months before the rover can recharge its solar batteries.

But even with the Martian skies blotted out by swirling dust and complete radio silence between our home world and the Red Planet, NASA’s scientist remain positive they can stir Opportunity from its deep slumber.

With hits like Kansas’ Dust in the Wind and Elton John’s Rocket Man (I Think It’s Going To Be A Long, Long Time), NASA has created the perfect playlist of songs to wake the rover up.

Michael Staab, an engineer at NASA’s Jet Propulsion Laboratory, told Space.com: “We’ll just keep playing until she talks to us.”

NASA shared its humorous playlist of 18 carefully selected, wakeful songs online on Spotify where fans of the US space agency can give it a listen.

You can find NASA’s Opportunity, Wake Up! Spotify playlist by clicking here.

From Gloria Gaynor’s I Will Survive to David Bowie’s Life on Mars? the list of tunes is both stirring and playful.

When NASA’s first rover landed on the dusty Red Planet in 2004, the space agency had a tendency to blast wake-up songs whenever Opportunity had to power down.

For instance, in April 2004 the Martian rover woke up to the tune of Woodie Guthrie’s (Take me) Riding in my Car.

And in May 2004 NASA’s engineers played The Pixies’ Where is My Mind after the Spirit rover underwent a software “transplant”.

NASA’s Jet Propulsion Laboratory said at the time: “The good news is that Spirit’s ‘mind’ is updated and operating as expected.”

The tradition seems to have died down somewhat over the years but NASA’s latest compilation of hit singles brings a much needed moment of joyful relief to the interrupted Martian mission.

The monstrous dust storm that engulfed Mars began sometime in May when NASA’s astronomers noted the storm had the potential to cover the entire planet.

The power of the storm was such it completely blocked out the skies leaving NASA’s Opportunity rover unable to recharge its batteries.

“Regardless, the project doesn’t expect to hear back from Opportunity until the skies begin to clear over the rover.

“That doesn’t stop them from listening for the rover every day.”

A NASA update shared on July 26 suggested the storm has entered a decay phase.

These are the hit songs on the Opportunity, Wake Up! playlist:

Hubble And Webb Pics Reveal DART Impact Was Even Bigger Than Expected : ScienceAlert
‘Unbelievable’ Video Shows 2 Bees Working Together to Open a Soda Bottle : ScienceAlert
Biology Inspires a New Kind of Water-Based Circuit That Could Transform Computing : ScienceAlert
We Just Got Our Closest View of Europa in 20 Years, And We Can’t Stop Staring : ScienceAlert
‘Dark Data’ Is Leaving a Huge Carbon Footprint, And We Have to Do Something About It : ScienceAlert