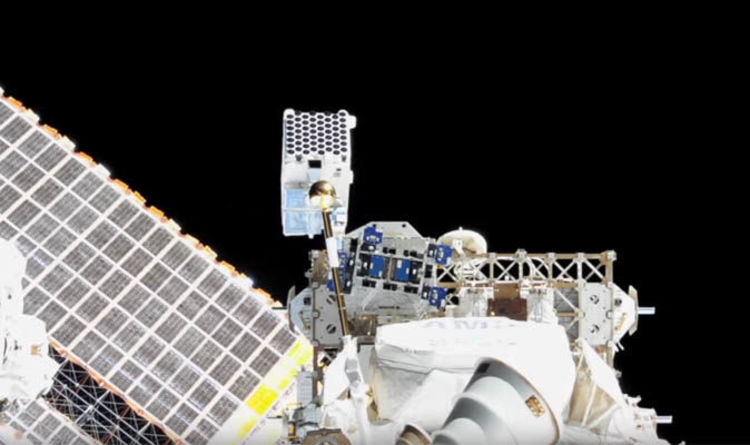 
The incredible timelapse video released by NASA was filmed in June this year during one of the ISS’ 90-minute orbits of the Earth.

In the video NASA showed off its Neutron Star Interior Composition Explorer (NICER) X-ray telescope as it spun and twisted outside the ISS.

NASA’s NICER instrument tracks and studies rapidly spinning, dense neutron stars known as pulsars some 50 years after they were discovered.

Perched outside the ISS, NICER scans the vast expanse of space every day for pulsars, sources of X-rays and our closest neighbouring stars such as Proxima Centauri.

The instrument’s movement seen in the NASA video was sped up 100 times as the ISS completed one of its 15 daily orbits of the Sun.

One of the reasons why NICER has to be every day on the move is the ISS’s massive solar panels which convert direct sunlight into electricity.

The 32 powerful solar arrays which measure 112 feet (34 meters) each can be seen spinning and moving around the barrelling space station to face the Sun’s rays.

To keep the panels out of NICER’s view, the instrument performs a pirouette every now and again to focus its 56 X-ray telescopes on a new target.

The NICER tool launched in early June and has been operational since July.

NASA aims to discover the incredible processes behind the intense electromagnetic radiation emanating from pulsars.

NICER’s principal investigator Keith Gendreau said: “Many nuclear-physics models have been developed to explain how the make-up of neutron stars, based on available data and the constraints they provide.

“NICER’s sensitivity, X-ray energy resolution and time resolution will improve these by more precisely measuring their radii, to an order of magnitude improvement over the state of the art today.”

Studying pulsar radiation could one day help astronauts better navigate in space by calculating the pulsars’ individual pulsations in many different directions.

Pulsars were first discovered around 50 years ago when astronomer Jocelyn Bell chanced upon unusual brightness flickers occurring every 1.33730 seconds.

Today scientists recognise at least 2,000 pulsars in space and tools such as the ISS-mounted NICER helps NASA study them in better detail.

As a little bonus teased by NASA at the start of the video, the US space agency said the solar arrays are seen parked in preparation for the arrival of Expedition 56.

The ISS expeditions is scheduled to wrap up in October this year when the six astronauts return to Earth after their long stint in space.

The expedition’s primary focus is to study navigation, microbiology and physics in the zero-gravity environment.

The Tonga Eruption’s 50 Million Tons of Water Vapor May Warm Earth For Months to Come : ScienceAlert
The Real Reason For Using Flight Mode Is Not What You Think : ScienceAlert
A Robot on Mars Detected The Tremors of Meteorites Hitting The Red Planet : ScienceAlert
A Weird Blob of Hot Gas Is Whizzing Around Sagittarius A* With ‘Mind-Blowing Velocity’ : ScienceAlert
Does IQ Decline as We Age? One Type of Intelligence Peaks in Your Twenties : ScienceAlert