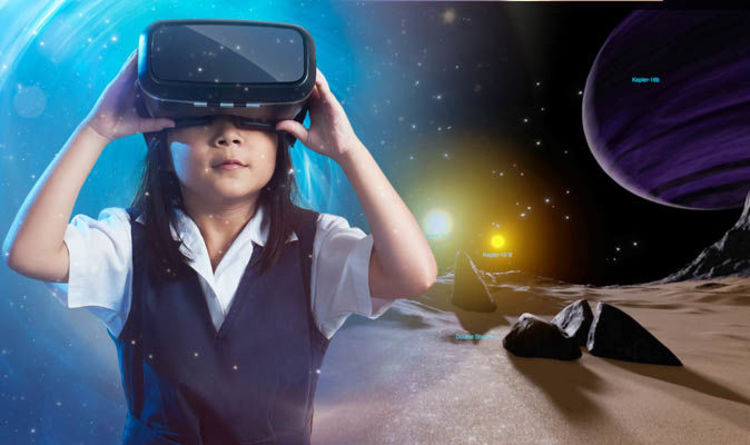 
The out-of-this-world trip “outside our solar system” is presented by NASA’s new virtual Exoplanet Travel Bureau.

The Exoplanet Travel Bureau is an interactive and explorable 360 degree visualisation tool of Kepler’s exoplanet discoveries.

The alien landscapes are viewable on desktops and mobile devices and those feeling a little more adventurous can view them on smartphone-compatible virtual reality headsets.

NASA said in a statement: “Are you looking for an exotic destination to visit this summer?

“Why not take a virtual trip to an Earth-size planet beyond our solar system with NASA’s interactive Exoplanet Travel Bureau?

“We live in a universe teeming with exoplanets, or planets outside our solar system. Unfortunately, even the nearest exoplanets are light-years away, so sending spacecraft and humans to these intriguing worlds remains a distant dream.

“But on NASA’s Exoplanet Exploration website, you can explore an imagined surface of an alien world via 360-degree, interactive visualisations.

“As you investigate each planet’s surface, you’ll discover fascinating features, like the blood-red sky of TRAPPIST-1d, or stand on a hypothetical moon of the massive planet Kepler-16b, which appears larger than either of the planet’s two suns.”

But exploring each exoplanet comes with a caveat – the virtual landscapes are 3D renders of what NASA’s artists think the planet surfaces look like.

NASA said: “You are viewing an artists’s impression of what an exoplanet might look like, based on limited data.

“No actual images of this planet exist.”

Exoplanets are distant worlds orbiting foreign stars in the far reaches of the cosmos.

NASA’s Kepler telescope, which launched in 2009, has to date found evidence of more than 3,700 exoplanets across the galaxy.

Astronomers hope many of these Kepler discoveries could one day uncover the secrets of life outside of Earth.

You can now visit a handful of these planets to get an idea of what these alien worlds might look like.

Alongside the 3D landscapes, visitors can download NASA’s gorgeous mock travel posters for each of the available exoplanets.

NASA said: “For even more information and visualisations of these alien worlds, check out NASA’s Eyes on Exoplanets mobile app.

“Based at the agency’s Jet Propulsion Laboratory in Pasadena, California, which is a division of Caltech, the program is NASA’s search for habitable planets and life beyond our solar system.

It Sounds Crazy, But Walking Backwards Is Really, Really Good For You : ScienceAlert
Forests at Risk of Burning an Extra 30 Days a Year Without Climate Action : ScienceAlert
Do You Need to Drink Eight Glasses of Water a Day? It’s Complicated : ScienceAlert
Psychologists Found a Weird Trick That Changes How Food Tastes : ScienceAlert
Millions of ‘Silent Synapses’ Could Be The Key to Lifelong Learning : ScienceAlert