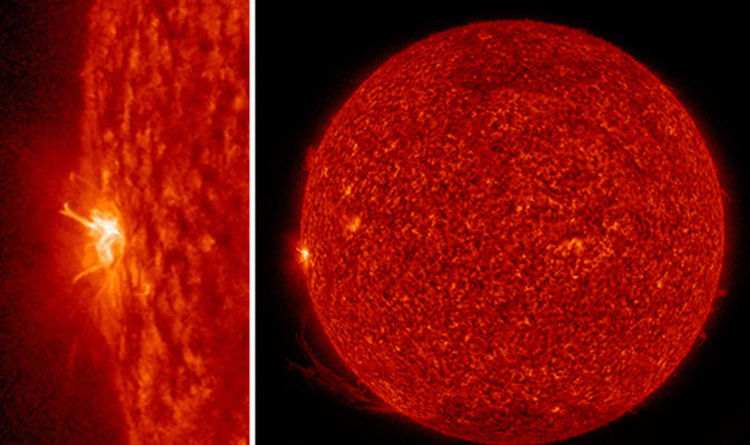 
The sunspot dubbed AR2699 by the space agency revealed itself with a flurry of B- and C-class solar flares yesterday and is the first activity detected on the Sun’s surface in over six months.

NASA‘s Solar Dynamics Observatory caught one of the explosions which coincided with the liftoff of a giant magnetic filament at 7.58pm GMT on Sunday.

According to NASA, these initial flares are relatively weak, however they mark an increase in activity by the Sun which is a sharp change from months of quiet.

Extreme UV radiation from the flares has been causing minor waves of ionisation in Earth’s upper atmosphere.

Previous solar flares detected on the Sun’s surface last year sparked fears radiation could heat up the Earth’s atmosphere to the point of causing widespread chaos.

The latest sunspot named AR2699 is located on the Sun’s eastern limb.

The Earth is currently on the eve of Solar Minimum, which is the period of least solar activity in the 11 year solar cycle of the Sun.

The massive sunspot measured in at more than 10 times the size of Earth, spanning 74,560 miles wide.

At the time scientists feared AR2665 would release an M-class solar flare – the second strongest after X-class.

The sunspot produced several solar flares and emitted a giant cloud of solar material and energy – known as a coronal mass ejection.

Solar flares can wreak havoc on global technology as the radiation which strikes our planet heats up the outer atmosphere, causing it to expand.

The camera witnessed a solar energetic particle event, firing off a flurry of high-speed protons triggered by the sunspot’s complex magnetic fields.

The incredible event occurred between July 5 and July 17, with the satellite watching on as it travelled across the face of the Sun.

Plants Have Been Keeping a Secret From Us About How Thirsty They Actually Are : ScienceAlert
This Artificial Synapse Can Run a Million Times Faster Than Ones in The Human Brain : ScienceAlert
For The First Time, Scientists Have Named a Heat Wave. Here’s Why It’s a Big Deal : ScienceAlert
A Nuclear War Could Starve Billions, But One Country May Be Safer Than The Rest : ScienceAlert
Scientists Gave Young Mice The Blood of Old Mice. Then Things Got Weird : ScienceAlert