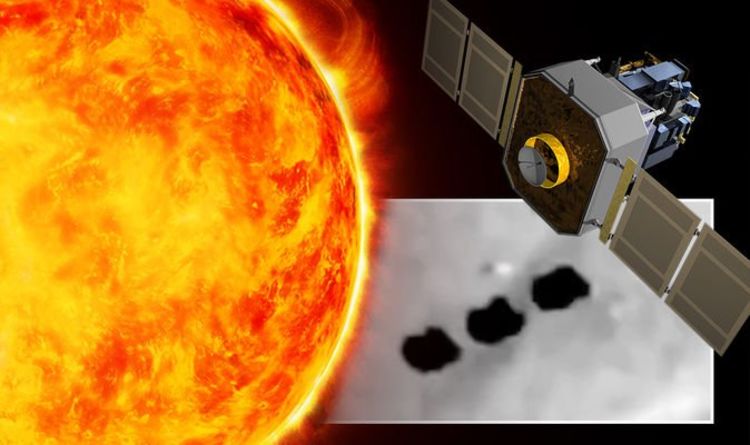 
NASA’s Solar and Heliospheric Observatory (SOHO) is an audacious attempt by the US space agency to understand both the internal structure and outer atmosphere of the Sun. Since it began orbiting our star, NASA’s space telescope has since 1996 been a categoric success, from understanding the Sun’s complicated gas currents hidden beneath its surface, to discovering more than 3,000 comets. But UFO hunter Scott Waring believes the NASA Sun observatory has now uncovered its most incredible discovery to date – spying three alien UFO as they shoot out of our star.

Waring took to his etdatabase.com blog to speculate about the seeming solar anomaly.

The UFO enthusiast begins by accusing the esteemed space agency NASA of being part of a conspiracy to cover-up the existence of extraterrestrials.

He wrote: “This video contains many UFOs shooting out of our sun and around the SOHO satellite.

“It’s amazing so many videos of UFOs exist and yet the US government won’t take any of them seriously.

“This means they are deliberately hiding the truth from the public.”

The video was originally posted by Youtube user SolarBug.

Enlarged screenshots of the grainy black and white footage does show three black shapes firing out of the Sun at high speed.

Waring takes this to be evidence of oddly-shaped UFOs existing the Sun, in defiance of all known laws of physics.

He goes even further, writing: “Yet just 3 seconds earlier there were three white UFOs in the exact same position also shooting out of the sun.

“It would be logical to conclude the aliens crafts caused the solar flare to take place.”

The Sun is a huge, glowing sphere of hot gas, comprised of 70 percent hydrogen and 28 percent helium.

This star beams so brightly because it is converting hydrogen into helium via the process of nuclear fusion in its extremely hot core.

This means that as time goes on, the Sun has less hydrogen and more helium.

SOHO moves around the Sun in step with the Earth, by slowly orbiting around the First Lagrangian Point (L1), where the combined gravity of the Earth and Sun keep SOHO in an orbit locked to the Earth-Sun line.

The L1 point is approximately 1.5 million km away from Earth – about four times the distance of the Moon, in the direction of the Sun.

Here, SOHO enjoys an uninterrupted view of our daylight star.

All previous solar observatories have orbited the Earth, from where their observations were periodically interrupted by Earth.