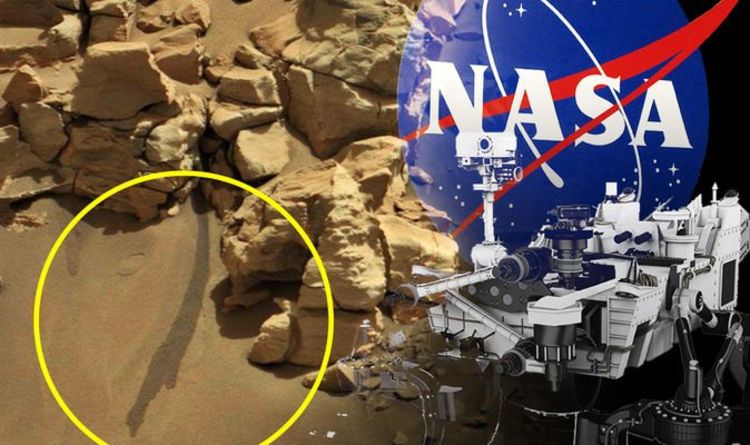 US space agency NASA’s Mars Curiosity rover was sent to the Red Planet to answer the ultimate question: did Mars ever have the right environmental conditions to support alien life. Early in its mission, the NASA unmanned probe’s scientific tools spotted verified chemical and mineral signs of past habitable environments on Mars. Now a self-styled alien life expert believes NASA is covering-up evidence of liquid water – the basis of life – on Mars.

The outlandish claims relate to an image taken by the Mars Curiosity’s right-hand Mastcam on Sol 712 (August 7, at 2.38 UTC)

Scott Waring took to his etdatatbase.com blog to speculate wildly about the alleged UFO sighting.

He wrote: “What I found here is water leaking out of some rocks on a hillside.

“This photo was taken back in Aug 2014 and I found it just a few months later.

“Yet NASA never declared finding this water at this location.”

Former NASA astronaut John Grunsfeld famously said in 2015: “Our quest on Mars has been to follow the water.”

Waring continued: “And yet, they ignored this water flow and never told the news or the public about the rover’s findings.

“They must have seen this, look how big and obvious the water flow is.

“It is impossible to miss it. So, the only other answer is NASA decided to hide it from the public.

“The rover could have easily analysed and tested this liquid to see if its water or something else, but again, NASA has not said or posted any more about this photo.”

Waring continued by bizarrely claiming NASA is colluding in concealing its discoveries from the public.

NASA conspiracy? Curiosity’s poses for a selfie at Aberlady and Kilmarie (Image: NASA)

“I bet they have found a half dozen living species on Mars already.

“Remember how the first life in space was announced by Russian astronauts who found large plankton growing on the solar panels of the space station a few years ago? Yeah … NASA didn’t do that … Russia did.

“Remember that gel found on the moon this week by the Chinese moon rover Jade Rabbit? Yeah … that wasn’t NASA too.

“If we want discloser of the truth about alien species, we have to rely on other sources instead of NASA.”

NASA actually announced evidence of liquid water on Mars in 2015.

The space agency said in a statement: “Dark, narrow, 100 metre-long streaks called recurring slope lineae flowing downhill on Mars are inferred to have been formed by contemporary flowing water.

“Recently, planetary scientists detected hydrated salts on these slopes at Hale crater, corroborating their original hypothesis that the streaks are indeed formed by liquid water.”

High-Fat Diets May Break The Brain’s Ability to Regulate Calories : ScienceAlert
Mysterious Medieval City in Africa Had a Genius System to Survive Drought : ScienceAlert
A Billion-Dollar Biotech Company Plans to Bring The Dodo Back to Life : ScienceAlert
Incredible ‘Fairy’ Robot Sails on The Breeze Like a Floating Dandelion : ScienceAlert
Bigfoot Has a Very Simple Explanation, Scientist Says : ScienceAlert