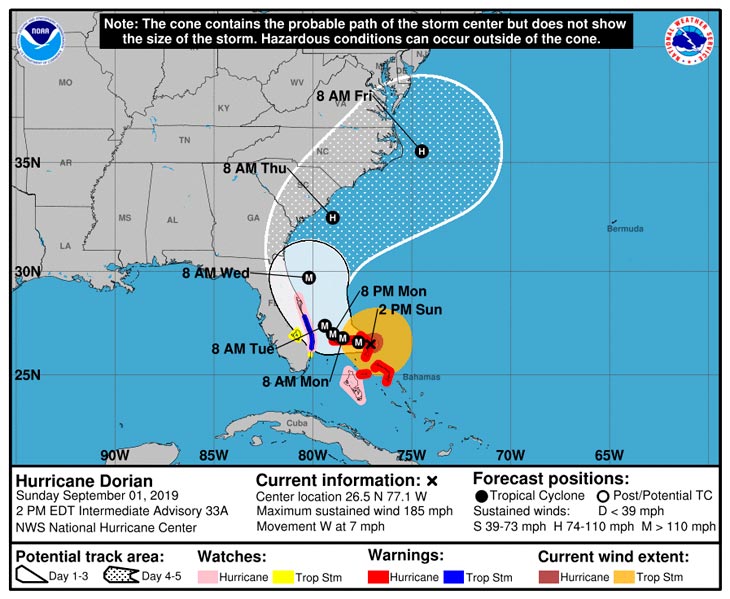 And when Dorian will approach the coast of Florida, Georgia and the Carolinas next week, those huge and powerful tides will be even more destructive and terrifying! And yes Hurricane Dorian is a monster:

Dude. This hurricane is a monster. I can’t believe this guy even has service. #Bahamas #Abaco #HurricaneDorian2019 pic.twitter.com/A4TvbT3jkF

While Hurricane Dorian is currently hitting the Bahamas on its way to Florida and the southeastern coast of the USA, Garden City, a town is South Carolina is already facing major flooding after King Tides.

King tide flooding tonight in Garden City. More of this expected over the next 4-5 days a few hours before and after these high tides:

According to the tweet, such floods are expected over the next 4-5 days a few hours before and after these high tides. The tweet was written on Friday, August 30. In other words, flooding due to these king tides can be expected until Tuesday at least, and maybe until wednesday and Thursday.

According to the latest forecast, Dorian will approach Florida on Tuesday as well as Georgia and South Carolina on Wednesday. So king tides will also be around (for sure in Florida and Georgia at least)!

Here a few terrifying videos showing Dorian making its way through the Bahamas:

#HurricaneDorian is raking Marsh Harbour on Great Abaco Island in the #Bahamas. The storm surge and hurricane force winds are already taking their toll as it slows down and stalls.
? Patrick Tully pic.twitter.com/2BWbgQPmba

Abaco Island in the Bahamas ???? is experiencing the severe effects of Hurricane #Dorian. This system is scheduled to remain over the island for 30 hours ??. ???? prayers needed for the people on the island. pic.twitter.com/iHo3J51NsD

Now imagine, what Garden City and other towns along the US southeastern coast will look like when the powers of the now Category 5 Hurricane Dorian and of the King tides will add up… A remake of Atlantis?

Be ready and if you are not ready yet, get prepared! That could turn totally disastrous!

Super-Rare Star System Is a Giant Cosmic Accident Waiting to Happen : ScienceAlert
Scientists Discover a Weird New Form of Ice That May Change How We Think About Water : ScienceAlert
Alarming Spread of Bird Flu Continues as More Species Infected : ScienceAlert
Planting More Trees in Cities Would Save Thousands of Lives, Scientists Say : ScienceAlert
Incredible ‘Fairy’ Robot Sails on The Breeze Like a Floating Dandelion : ScienceAlert