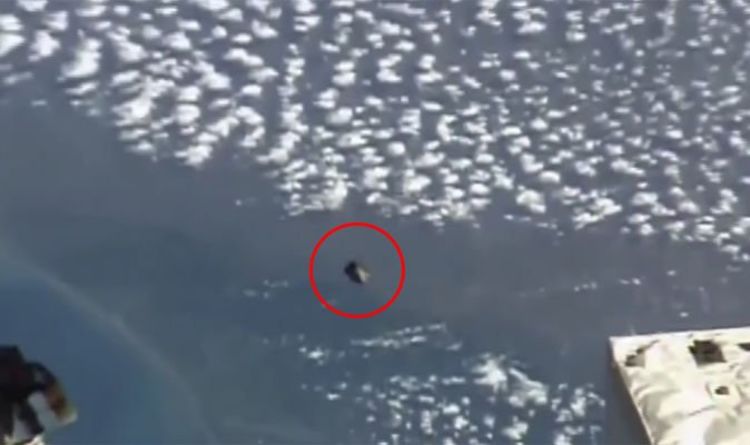 
Astonishing footage of a UFO hovering above Earth has been caught by NASA cameras. The incredible video, captured on the NASA live camera from the International Space Station (ISS), sees the cone-shaped object keep pace with the ISS above it. In a bizarre twist, the NASA camera zooms in on the object, appearing to show that the US space agency ackwnoledges the UFO.

The footage was posted by UFO expert Scott Waring on his YouTube channel ET Data Base and has since gone viral across social media.

The 22-minute long footage shows the bus-sized UFO moving at the same speed as the ISS, which moves at 78km/second.

At the end of the live feed stream, the UFO shoots upwards and disappears, leaving behind a green burst of light.

During the NASA footage, the space agency workers are discussing maintenance on the space station.

JUST IN: UFO sighting? Has ‘alien craft’ been spotted near to Area 51?

However, at one point, the NASA live camera suddenly “notices something down there and begins to zoom in on it”.

Scott Waring said: “That is NASA zooming in on the UFO, not me.

“They are as baffled by it as I am. They don’t know what it is or why it is there

“During the feed, they mention coordinates, and that could be secret code as to the location of the object. They don’t want to be too obvious.

Love The Smell of Rain? There’s an Ulterior Motive Behind The Lure of Petrichor
Our Exploitation of Wildlife Is Directly Causing More Viruses to Spread to Humans, Study Shows
An Unusually Large Hole Has Opened in The Ozone Layer Over The Arctic
Scientists Find a Half Male, Half Female Bee, Split Right Down The Middle
Scientists Took Mentos And Coke to The Top of a Mountain, For Science