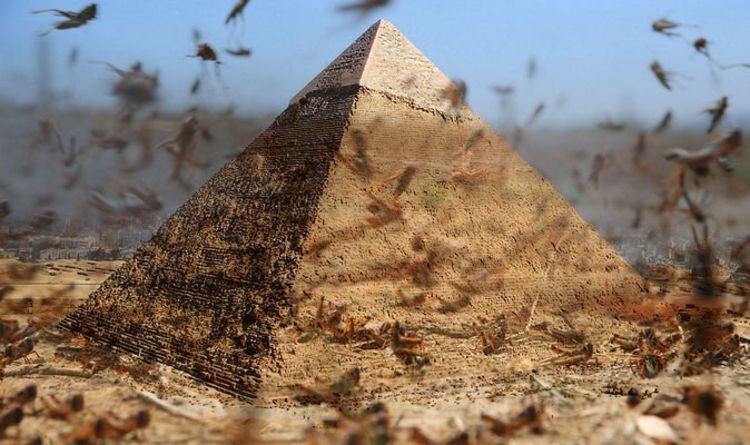 
The worst plague of locusts in 70 years is currently ravaging East Africa, endangering economies in a region heavily dependent on agriculture for food security. In recent days, the infestation has hit South Sudan, Uganda and Tanzania, having already decimated crops throughout Ethiopia, Kenya and Somalia. The Food and Agriculture Organisation (FAO) has called the situation “extremely alarming,” and Egypt could soon be invaded as they head northbound along the Red Sea.

Scientists are pointing the finger at climate change, blaming rapidly warming waters in the Indian Ocean off Africa’s eastern coast becoming the perfect breeding ground, but Biblical writer Mark A. Kellner has another theory.

He said earlier this month: “Rarely since the Exodus of Hebrew slaves from Egypt has the African continent seen such a sight, locusts swarming throughout Ethiopia, Kenya, Somalia, South Sudan and Uganda.”

Mr Kellner is referring to the Plagues of Egypt – a story depicted in the Book of Exodus in which God inflicts 10 disasters, or plagues, on the Egyptian people after the Pharaoh refuses to accept Moses’ demands for the Israelites to be freed from their chains of slavery.

Exodus 10:12-15 reads: “And the Lord said to Moses, ‘Stretch out your hand over Egypt so that locusts swarm over the land and devour everything growing in the fields, everything left by the hail’.

“So Moses stretched out his staff over Egypt, and the Lord made an east wind blow across the land all that day and all that night.

“By morning the wind had brought the locusts; 14 they invaded all Egypt and settled down in every area of the country in great numbers.

“Never before had there been such a plague of locusts, nor will there ever be again.

“They covered all the ground until it was black. They devoured all that was left after the hail – everything growing in the fields and the fruit on the trees.

“Nothing green remained on tree or plant in all the land of Egypt.”