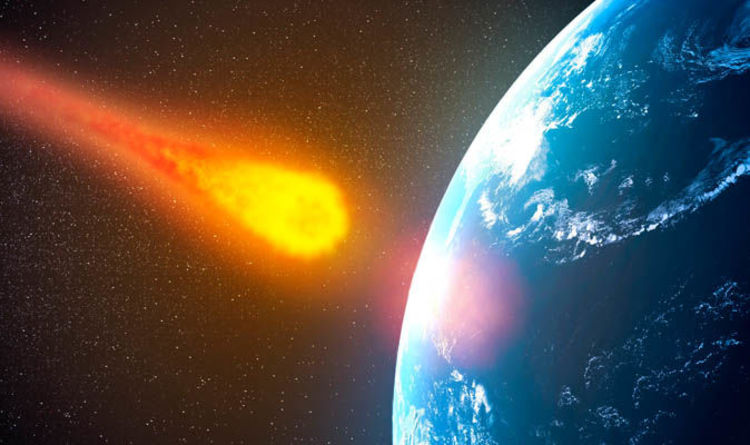 NEOs, or Near Earth Objects, are asteroids or comets which approach the planet within 1.3 astronomical units (AU) or 120.8 million miles (194.5km).

The space agency’s NEO Close Approach Data repository suggests the asteroid is travelling at speeds of up to 9.77 km per second or 21,854mph.

An asteroid impact of this size could be incredibly devastating, wiping out millions of lives.

He said: “The potentially hazardous Asteroid 2015 FP118 will have a safe, relatively close encounter with us, coming as close as 4.7 millions of km – about 12 times the average lunar distance.”

Mr Masi even managed to snap a picture of the asteroid on Thursday, August 30, when FP118 was still 3.4 million miles (5.5 million km) from Earth.

NASA estimates the asteroid will pass Earth at a distance of 12.23 lunar distances (LD).

This means the asteroid will be more than 12 times further than the Moon when it flies by tonight.

But the asteroid is still classified as a “Potentially Hazardous Asteroid” (PHA) by The International Astronomical Union’s (IAU) Minor Planet Centre.

PHAs are either near-Earth asteroids or comets which make strikingly close flybys of Earth.

These space rocks all have a so-called Earth Minimum Orbit Intersection Distance of 0.05au or less – 4.64 million miles (7.47 million km).

NASA explained: “Potentially Hazardous Asteroids (PHAs) are currently defined based on parameters that measure the asteroid’s potential to make threatening close approaches to the Earth.

“Specifically, all asteroids with an Earth Minimum Orbit Intersection Distance of 0.05 au or less and an absolute magnitude of 22.0 or less are considered PHAs.

“In other words, asteroids that can’t get any closer to the Earth than 0.05au or are smaller than about 140m in diameter are not considered PHAs.”

Asteroid FP118 will next approach the planet seven years from now on the night of July 6, 2025.