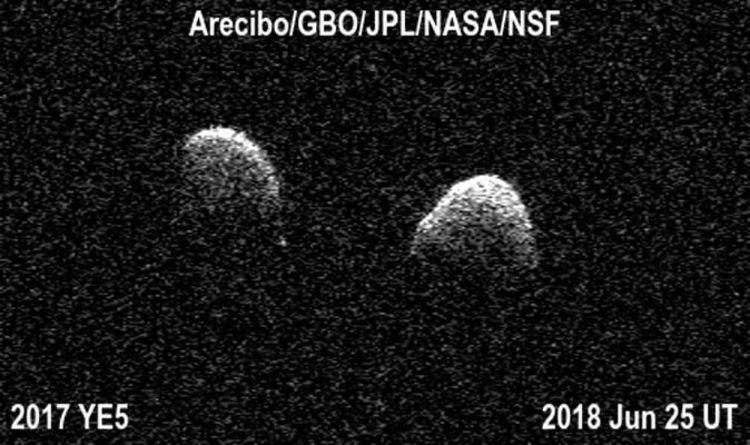 
The near-Earth asteroid 2017 YE5 was first spotted by astronomers on December 2017 but little was known about the space rock.

One year later and on June 21, 2018, the asteroid made its closest approach to the planet for the next 170 years.

When the asteroid approached within 3.7 million miles of Earth, NASA was to reveal some of its incredible physical proprieties.

NASA’s astronomers at the Goldstone Sola System Radar (GSSR) in California determined YE5 was not one, but two asteroids – a so-called binary system.

GSSR observations revealed two very distinct shapes dancing around one another in space.

NASA’s new photographs of the binary system offer the most detailed observations yet of this unusual phenomenon.

A NASA Jet Propulsion Laboratory 9JPL) release said: “Scientists at the Arecibo Observatory in Puerto Rico had already planned to observe 2017 YE5, and they were alerted by their colleagues at Goldstone of the asteroid’s unique properties.

“On June 24, the scientists teamed up with researchers at the Green Bank Observatory (GBO) in West Virginia and used the two observatories together in a bi-static radar configuration.

“Together, they were able to confirm that 2017 YE5 consists of two separated objects.

“By June 26, both Goldstone and Arecibo had independently confirmed the asteroid’s binary nature.”

Astronomers at NASA have now determined the asteroids circle each other roughly once every 20 to 24 hours.

The scientists estimate the asteroids measure about 3,000 feet in size each.

If the asteroids were ever to crash into the planet the effect could be devastating on an unimaginable scale.

The 1908 Tunguska asteroid which is believed to have exploded over Siberia was between 200 and 620 feet and wiped out 2,000 square kilometres of forest.

NASA classifies any near-Earth Object larger than 460 feet in size to be a grave risk to entire regions or continents.

A 2018 White House report, co-published by NASA on the US’ readiness to deal with rogue asteroids, warned it is impossible to keep track of all these asteroids.

The report read: “Such objects would strike Earth with a minimum energy of over 60 megatons of TNT, which is more than the most powerful nuclear device ever tested.”

Thankfully asteroid YE5 seems to orbit the the sun at a safe distance from Earth.

At its closest approach, the asteroid was 16 times the distance between Earth and the moon.

YE5 is the fourth ever binary near-Earth asteroid observed where the two separate bodies do not touch.