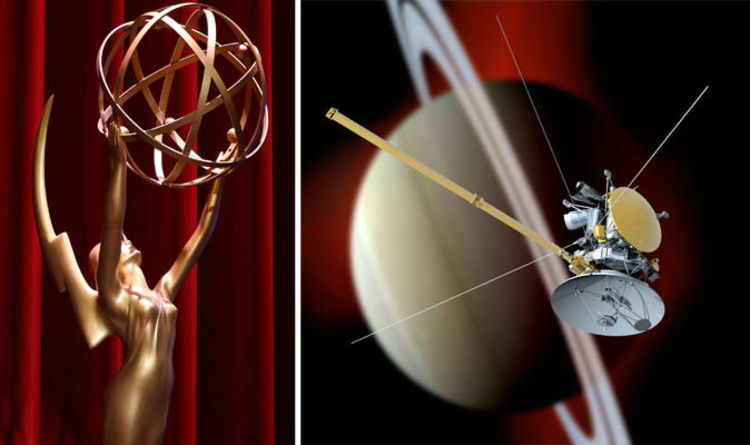 
The Academy of Television Arts and Sciences nominated NASA’s Jet Propulsion Laboratory (JPL) for its contributions to television, education and social media.

The Primetime Emmy Award is handed out to the very best of American television programming with hit acts like Game of Thrones and Breaking Bad scoring numerous accolades over the years.

But NASA’s incredible broadcasting of the Cassini spacecraft’s death fall to Saturn has earned the space agency a special nomination this year.

NASA’s JPL said: “This is NASA’s first mission entered for an Emmy with the interactive media peer group.

“Thank you so much for your consideration.”

The Academy of Television Arts and Sciences will hand out the Emmy awards later this year in Los Angeles on September 17.

In 2017, after nearly 20 years of solar system exploration, NASA pulled the plug on the Cassini space probe mission.

The Cassini probe spent 13 years of its life orbiting the ringed planet for some of the most detailed and significant space observations in NASA’s history.

But once the orbiter began running low on fuel NASA orchestrated the probe’s one last mission – the Grand Finale.

NASA’s JPL said in a release: “This journey into the unknown would end with a spectacular plunge into the planet.

“JPL created a multi-month digital campaign to celebrate the mission’s science and engineering accomplishments and communicate why the spacecraft must meet its end in the skies of Saturn.

“Cassini’s first, daring dive into the unexplored space between the giant planet and its rings kicked off the campaign on April 26, 2017.

“It culminated on September 15, 2017, with live coverage of Cassini’s plunge into Saturn’s atmosphere, with the spacecraft sending back science to the very last second.”

NASA touted its #Cassini social media campaign as one of the biggest and most impactful of the decade, with a potential eight billion online impressions.

NASA said: “As people shed tears for a robot billions of miles away, the New York Time, the Los Angeles Times and 18 other newspapers across America ran front page stories and photo spreads.

“Google made a doodle, Hallmark made an alternative happy ending and editorials from The Washington Post and The Chicago Tribune released headlines like: ‘The Cassini mission embodies the best of humanity’.”

Cassini’s plunge into Saturn’s atmosphere was followed by live-tracking back on Earth, a 360 degree livestream and multiple videos and photos.