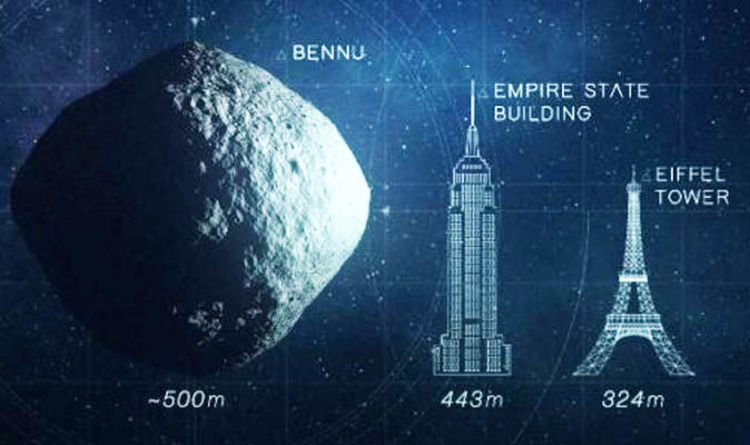 NASA’s top scientists have calculated the deep space asteroid could slam into Planet Earth on September 25 2135.

At least half a dozen asteroids skim past Earth during any given month but Bennu’s sheer size has given astronomers true cause for concern.

The monstrous spherical asteroid measures a staggering 492m (1,614 feet) in diameter, according to NASA’s estimates.

Bennu is both larger than the Empire State Building and the Eiffel Tower and almost matches Malaysia’s Petronas Tower in stature.

An asteroid this gigantic would unleash absolute chaos and destruction upon the planet on impact, wiping out life for tens of kilometres, scientists have warned.

Dante Lauretta, professor of Planetary Science in the Lunar and Planetary Laboratory at the University of Arizona, said: “The asteroid mass would hit the surface of the Earth at a velocity of 12.1 km/s (over 27,000 miles per hour).

Asteroid Bennu: The NASA asteroid threat is about 500m in diameter

The odds of Bennu actually crash landing on Earth are relatively slim – only about one in 2,700 or 0.037 percent.

But the asteroid is a potential Earth Impactor listed on NASA’s Sentry Risk Table.

Whatever the scenario may be, Mr Lauretta assured the effects of impact would be limited in size and scope to a 50km radius.


He said: “We’re not talking about an asteroid that could destroy Earth. We’re nowhere near that kind of energy for impact.”

Anyone caught within the immediate blast zone would be incredibly unlikely to survive but hundreds of kilometres outwards locals would barely register a tremor beneath their feet.

The asteroid is simply not big enough to cause an extinction level event and pales in comparison to the asteroid which is believed to have wiped out the dinosaurs. 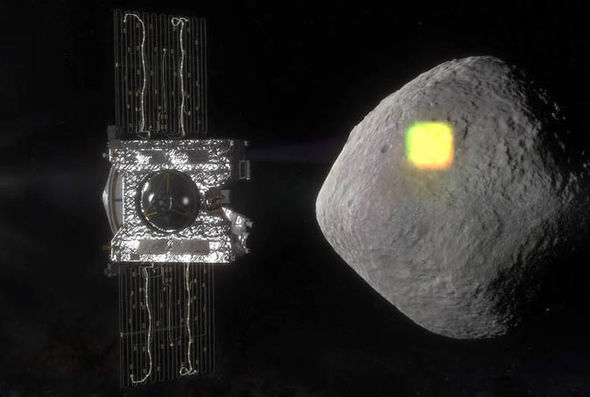 Asteroid Bennu: NASA will study the rogue asteroid with the OSIRIS-REx space probe

Scientists estimate the asteroid which killed the dinosaurs some 65 million years ago was anywhere between 10km to 15km in diameter.

However very little is still known about the interstellar Bennu.

Bennu orbits the sun roughly every 436 days and crosses paths with Earth every six years or so.

But all of this could soon change when NASA’s OSIRIS-ReX (Origins, Spectral Interpretation, Resource Identification, Security, Regolith Explorer) space probe lands on the asteroid.

OSIRIS-ReX will make its approach to Bennu in August this year before landing in December.

The goal of the mission is to study Bennu’s origin and composition.

“This is important because primitive asteroids like these may contain volatiles and organic molecules that could trace the origins of life on Earth and the potential for life elsewhere.”

Newly Discovered Fossil Reveals Hundreds of Teeth ‘Never Seen Before in a Pterosaur’ : ScienceAlert
One Simple Idea Makes It Much Easier to Manage Your Weight Over Time : ScienceAlert
This Species of Carnivorous Plant Evolved Into a Toilet And Is Now Winning at Life : ScienceAlert
An Expert Explains Why The Radioactive Water Stored at Fukushima Should Be Released : ScienceAlert
Sword Mistaken For Replica Is Actually An Ancient 3,000-Year-Old Weapon : ScienceAlert