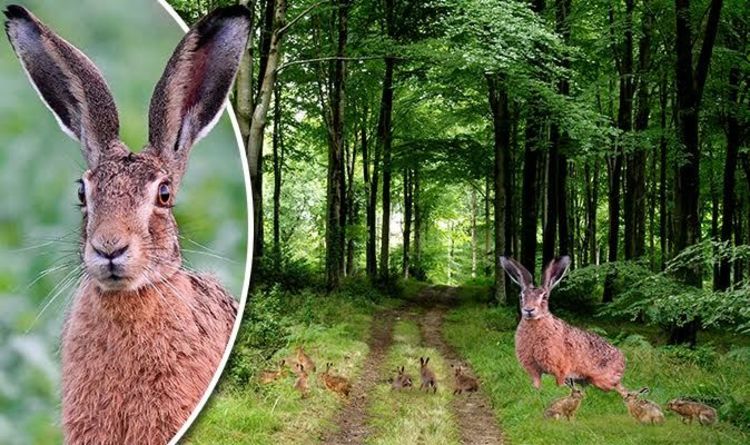 Could giant hares like this one in our mock-up image really roam the UK countryside?

Louise Hodgson is convinced she saw a hare the size of a roe deer surrounded by normal-sized hares in a Dorset valley.

Louise, who now runs sacred site tours in Dorset, said she was on the nearby downs when she met a small group of Romany Gypsies with some lurcher dogs.

She said: “We came to a blind valley and it was early September, so it was an unusual sight for that time of year, but there was a group of 10 to 13 hares with what we thought was a deer.

“But it wasn’t, it was a hare the same size as a deer. It was a wonderful experience. It shows there are still some secrets in nature.”

Louise said the “magical” experience was in 1976, during a country trek she took from the Cotswolds to Dorset, but the vision has haunted her ever since.

She recounted the tale during a question and answer session with Marian Green, 77, at the annual Occult Conference in Glastonbury Town Hall, in Somerset, which ended yesterday.

She said: “Has anyone else come across that?”

Marian, who was explaining about magic in the natural world, replied: “In the countryside many things happen, the ‘king’ or ‘queen’ hares are out there. 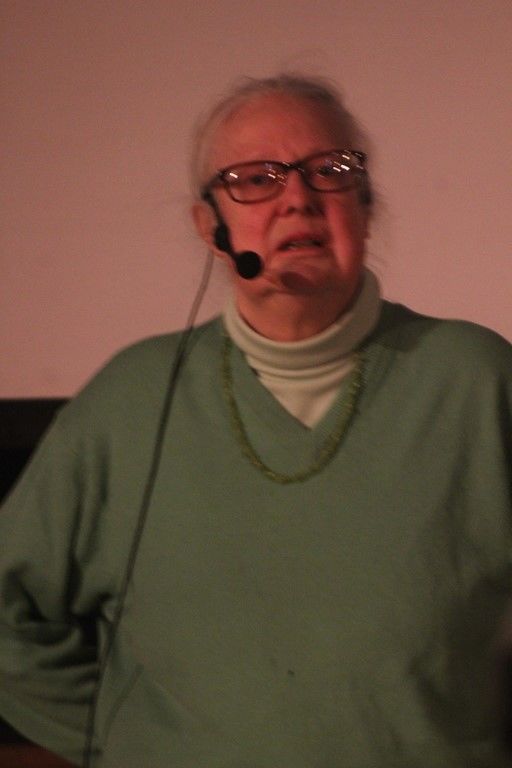 Marian Green talks about mythical beings at the Occult Conference in Glastonbury.


It was a hare the same size as a deer. It was a wonderful experience. It shows there are still some secrets in nature.


“So are fairies, elemental spirits, or ghosts.

“If you want things to happen, if you let them happen, they can if you are open to it.”

Earlier in her talk, Marian had said fairies and sylphs, small mythological elf-like creatures, were real.

She said: “Sylphs, and all living beings, are around us. Some want to speak to us again, connect with us again and we can be oblivious to what is going on around us.”

After the lecture Louise told Express.co.uk she had been near the village of Uploders, near Bridport, in Dorset, when it happened.

Marian told Express.co.uk she had heard of one other person seeing a gigantic hare in the countryside.

She said: “If you are open to seeing these things, it can happen.”

According to Dr Karl Shuker, a cryptozoologist, who is aware of Louise’s sighting, it is not the only one, but there have been more sightings of giant rabbits.

Cryptozoologists research the existence of mythical creatures and if extinct species are still alive.

Dr Shuker said there have been two giant rabbit sightings in Banbury, Oxfordshire, and another one in Felton, Northumbria.

In a blog post he also said there have been many giant rabbit and hare sightings in Ireland since the 1970s.

However, he is not convinced there is anything supernatural about the sightings.

In a blog post on his website, he said large rabbit sightings are likely to be escaped domesticated large species such as the Flemish Giant, the Continental Giant, which can grow up to 55lbs and the size of a cocker spaniel.

He added: “But what of the king hares? The British Isles is home to two indigenous species of hare.

“The most common, widespread, and familiar of these is the brown hare Lepus europaeus.

“One of the world’s largest species of hare, it can attain a body length of up to 30 inches, plus a tail length of up to sixches, which means that individuals at the upper end of this species’ size range can be as much as 3 feet, and can weigh up to 11lbs, i.e. as big as a decent-sized dog.

“As many people do not realise that hares in Britain can attain such notable dimensions, the sight of an exceptionally large hare coupled perhaps in some cases with less than accurate size-estimation skills on the part of its observer may be sufficient to ‘create’ a king hare.

“Moreover, there might be individual hares possessing a mutant gene that expresses extra-large body size, or even suffering from a hormonal imbalance that results in gigantism, comparable to various endocrinologically-based conditions recorded from humans.”

The Latest Milky Way Survey Shows Off an Incredible 3.32 Billion Celestial Objects : ScienceAlert
Scans of Mummified ‘Golden Boy’ Reveal He Was Covered in Magical Protections : ScienceAlert
Bacteria Can Use Plastic Waste as a Food Source, Which Isn’t as Good as It Sounds : ScienceAlert
An Iceberg The Size of London Has Broken Free From Antarctica Ice Shelf : ScienceAlert
Mysterious ‘Zone of Uncertainty’ Inside The Brain Reveals a Surprise : ScienceAlert