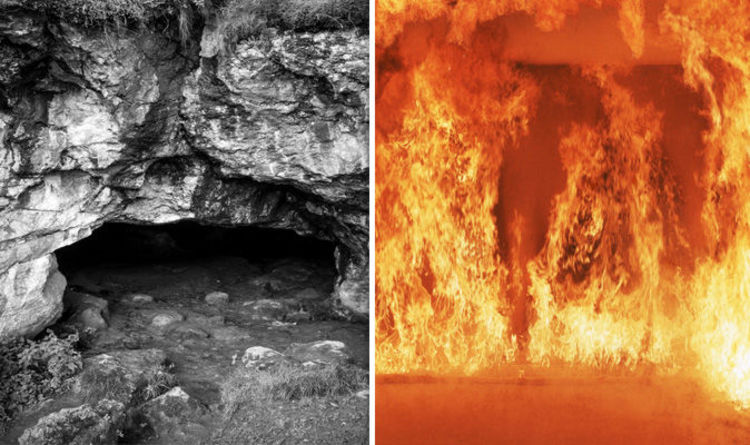 
Some 2,200 years ago, priests were leading animals to the cave to demonstrate the entrance was a portal to doom as the animals would die pushed inside.

This apparently showed a divine intervention that the followers of God would be protected from the gates of hell, while animals would perish.

Greek historian Strabo, who lived from 64 BCE to 24 CE, wrote: “This space is full of a vapour so misty and dense that one can scarcely see the ground.

“Any animal that passes inside meets instant death. I threw in sparrows and they immediately breathed their last and fell.”

Even animals as big as bulls were led to the cave in front of large crowds where the priests would usher them in, before the animal would die.

However, scientists believe that they have now figured the ‘miracle’ out.

Researchers from the University of Duisburg-Essen in Germany found that seismic activity deep in the cave was leading to a build up of volcanic carbon dioxide.

Measurements taken by the team showed the build up of gas accumulated into a “lake” of mist that rose 40 centimetres (15.75 inches) above the cave’s floor.

The experts now believe the priests were actually conning the public, and were aware of the concentrated levels of poisonous carbon dioxide, so they would hold their breathe or stand above the ‘lake’.

The team write in their research paper: “While the bull was standing within the gas lake with its mouth and nostrils at a height between 60 and 90cm, the large grown priests (galli) always stood upright within the lake caring that their nose and mouth were way above the toxic level of the Hadean breath of death.

“It is reported that the priests sometimes used stones to be larger.”

A Lost Interview With The ‘Father of The Big Bang’ Was Just Discovered : ScienceAlert
Wildfire Destruction in The Western US Has Doubled in Just 10 Years : ScienceAlert
Human Brain Organoids Transplanted Into Rats Just Passed a Major Milestone : ScienceAlert
More Life Than We Ever Realized Could Survive in The Deep Dark of The Ocean : ScienceAlert
Alarming Spread of Bird Flu Continues as More Species Infected : ScienceAlert