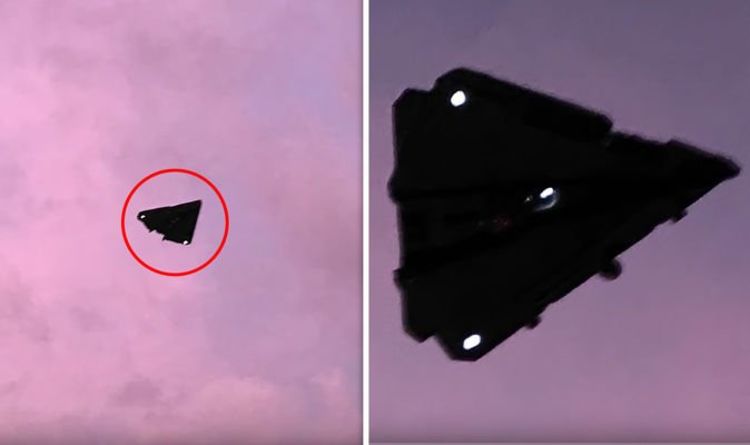 The “triangular ship” near the PANG base in Oregon has raised suspicions of a bizarre US military test.

Conspiracy theories suggest the aircraft could be a super-secret stealth spy airplane, while others point to “reverse-engineering” linked to alien contact.

Blake and Brett Cousins of thirdphaseofmoon, who posted the pictures in a clip  this week, cited “multiple accounts” from a number of onlookers in the area.

They said: “We recieved multiple eyewitnesses from residents in the area.”

They continued: “You can rule out any photoshop because these new, crystal-clear photographs show the sharp edges and the motion involved.

“I mean, look at the inner chamber inside this craft. This area has been known as a hotspot for strange sky sightings. Could this be proof of reverse engineering?”

Images and eyewitness accounts of the flying aircraft have been linked to the infamous TR-3B.

The alleged TR-3B Black Manta is an aircraft that is thought to have been developed for the US Air Force as part of a secret black project.

Many have long speculated that the supersonic stealth plane, with a recognisable triangular design, was used during the Gulf War.

Dozens of UFO fans applauded the footage, bringing up the military base in the vicinity.

One even suggested that it could be a new stealth drone, the XQ-58A.

One Simple Idea Makes It Much Easier to Manage Your Weight Over Time : ScienceAlert
Scientists Have a Plan to Turn Earth Into a Giant Observatory : ScienceAlert
People Who Don’t Exist Look More Real Than Actual People, Study Finds : ScienceAlert
Newly Discovered Fossil Reveals Hundreds of Teeth ‘Never Seen Before in a Pterosaur’ : ScienceAlert
Babies May Not Be Born With a Microbiome After All, Scientists Say : ScienceAlert