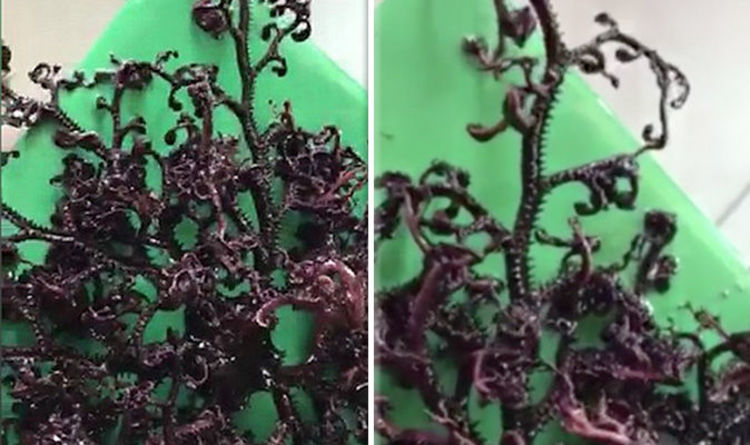 
Beachgoers in Vietnam have discovered a shocking “sea creature”  with squirming tentacles that has baffled locals.

In the video, the “alien-looking” creature, which does not appear to have a face, wriggles its many black tentacles.

Locals found the so-called “monster” washed up in the Kien Giang province of southern Vietnam.

Speculation online exploded after the video was uploaded, with viewers questioning whether the creature was an alien, an unknown animal or simply a plant.

Some users likened the mass of moving tentacles to a monster out of a science fiction movie.

Du Man Du, the man who spotted it, took the creature from the beach to a nearby green table, where he filmed the mysterious organism

The tour guide records the creature moving tentacles in the air, before touching the tentacles which appear to move towards him.

He remarked: “I don’t know whether it’s an animal, vegetation or something else.”

Beach-goer, Kim Tho said: “It’s a monster. One day it will come back out of the ocean. It’ll be ten times bigger.”

The mystery sea-dweller was later released back into the ocean.

Experts are divided over what the creature was, with some claiming it was a basket starfish, which usually live in South America.

Others believe it was a piece of seaweed reacting to the air.

Mike Van Keulen, a Marine Biology expert from Murdoch University, told Yahoo7 News that the creature was likely a member of the brittle star group, which are closely related to starfish.

Ancient Burial of a Young Girl Shows How We Carried Our Babies 10,000 Years Ago : ScienceAlert
Deep Brain Simulation Could Alleviate OCD When Other Treatments Have Failed : ScienceAlert
The Pacific Is Destined to Vanish as Earth’s Continents Meld Into a New Supercontinent : ScienceAlert
Bitcoin’s Climate Impact Is Bigger Than Beef Farming – And It’s Only Getting Worse : ScienceAlert
Secret Clues in Tutankhamun’s Tomb Reignite The Idea That Nefertiti Is Hidden Nearby : ScienceAlert