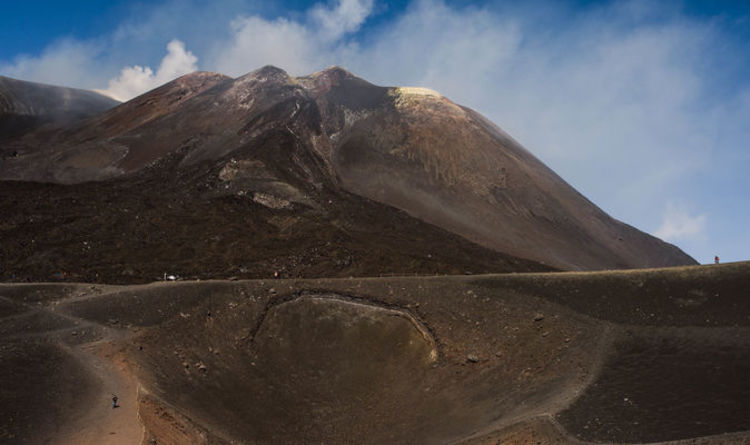 
The fiery volcano – one of Europe’s most active – is slowly sliding into the Mediterranean Sea and could eventually trigger cataclysmic landslides and tsunamis.

Scientists from the Bulletin of Volcanology studying the volcano confirm the entire volcano is slowly sliding in an east-south-east direction towards a small coastal town of Giarre.

The volcano is currently moving at an average pace of 14mm (0.55 inches) every year – but experts say this doesn’t immediately raise the risk of danger around the area.

The landscape surrounding Mount Etna is an ever-changing environment and more pressing issues are of a higher concern to scientists.

Where is Mount Etna?

Mount Etna is a stratovolcano on the east coast of Sicily, Italy, in the Metropolitan City of Catania, between the cities of Messina and Catania.

It is an active volcano, which means it is often spewing ash and gases from its peak – as recently a January 2017, which formed a new crater.

However, the locals who reside in the area around Etna could be at risk long term, according to volcanologist John Murray, of the Open University.

Mr Murray wrote: “The Geological record shows that such sliding volcanoes are prone to devastating sector collapse on the downslope side.“

Etna has been restless and aggressive for millennia, with its first confirmed eruption occurring around 6000 BC, according to the Smithsonian.

The volcano is constantly shifting and bubbling, with around three million people living under its shadow, within a 62-mile radius.

Etna, sitting on the east coast of Sicily, is the highest peak in Italy south of the Alps.

It remains one of the most active volcanoes in the world, being in an almost constant state of activity.

Murray and his team planted more than 100 GPS sensors around the volcano to track its ever-shifting pattern, finding that the mountain is expanding due to gravitational influences.

The sensors revealed that the shift varied between 0.4 and 0.7 inches.

Because the rock platform that Etna sits on is made of weaker and more flexible sediments, the whole volcano is sliding downhill towards the sea.

The effects of this long-term disaster could be devastating, causing tsunamis across the Mediterranean to the rest of Europe.

The shifting rock also poses problems for researchers who are monitoring the location of magma. Eruptions could all of a sudden become much more difficult to predict.

While it is unlikely that Etna will disappear into the sea in our lifetime,  the “continued sliding for hundreds of thousands of years could cause it to become dangerously unstable,” according to Murray.

This Species of Carnivorous Plant Evolved Into a Toilet And Is Now Winning at Life : ScienceAlert
The Latest Milky Way Survey Shows Off an Incredible 3.32 Billion Celestial Objects : ScienceAlert
Major Blow as Experimental HIV Vaccine Fails in Late Clinical Trial : ScienceAlert
‘Funky Worm’ Fossil Helps Explain The Mysterious Origins of Amphibians : ScienceAlert
One Simple Idea Makes It Much Easier to Manage Your Weight Over Time : ScienceAlert