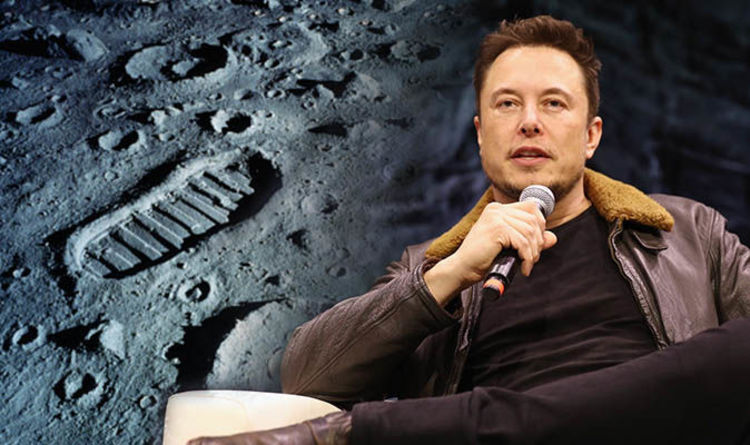 
Colonel Hadfield, who formerly commanded the International Space Station (ISS), said commercial enterprises like SpaceX, together with governments, will push the boundaries of what’s possible.

Speaking at the IP EXPO Europe conference in London’s Royal Victoria today, the Canadian astronaut believes technology is moving forward faster than ever before.

He told Express.co.uk: “We’ll be settling the Moon really soon.”

According to Mr Hadfield, the key to human-led space exploration is the partnership between venture capitalists and government agencies.

He named SpaceX’s Elon Musk and Blue Origin’s Jeff Bezos as some of the people who are making the “impossible possible”.

But all of this is done in commercial partnership with established bodies like NASA and the European Space Agency (ESA).

He compared the entrepreneurs to the Age of Discovery where explorers including Christopher Columbus, James Cook and Portugal’s Henry the Navigator, led maritime discovery.

Mr Hadfield said: “It’s going to be a mixture and it should be. It parallels the historical precedent.

“We are generally limited by technology and then somebody pushes this technology in a profitable way.

“The technology becomes good enough that then it can start to become profitable and open for private business.

“If you look at the work that was done in the 1400s in Portugal and Spain, by Henry the Navigator and company, they spent a fortune.

“They created the caravel – a ship that could beat the wind and sail in shallow waters. It was their spaceship of the time.

“They didn’t want to go the spice islands without having to walk all the way there and back, but they pushed that technology for a long time and then with the combination of venture capitalists and government and businesses they started launching ships.”

Just like Bartholomew Diaz sailed around the southern tip of Africa in 1488, Mr Hadfield said the combination of new technology and someone managing that technology is “in the purview of government”.

One of the people particularly pushing this forward is SpaceX founder Elon Musk.

The biggest challenge beyond colonising the Moon is sending humans further out into space, to places like Mars.

Recently, Mr Musk teased his ambition to build a Martian colony on the Red Planet as early as the year 2028.

But Mr Hadfield is not convinced the technology is here yet to allow us to efficiently travel between planets.

The astronaut said chemically propelled rockets – the kind used on a daily basis – are not the right kind.

He suggested electromagnetic acceleration or electric ion propulsion could be the key to reaching Mars one day.

During his opening keynote today, Mr Hadfield noted: “Our pace of invention is not fast, it’s accelerating. Things will never be this slow again.”

Jupiter’s Ice Moon Europa Probably Has Upside Down, Underwater Snow : ScienceAlert
Weird Creature With No Butt May Not Be Our Ancient Ancestor After All : ScienceAlert
These Asteroid Particles May Be Our Most ‘Pristine’ Sample of The Outer Solar System : ScienceAlert
Scientists Achieved Self-Sustaining Nuclear Fusion… But Now They Can’t Replicate It : ScienceAlert
Researchers in South America Discover a New Species of Tiny but Tough Dinosaurs : ScienceAlert