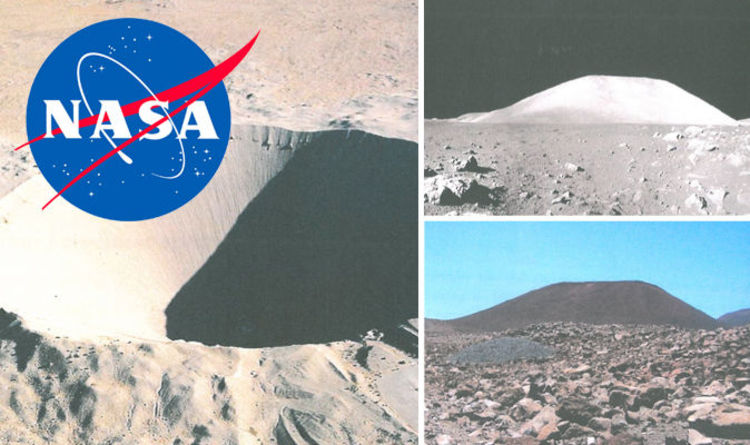 
Mr Bryant, who also runs a business selling meteorite parts, has compared NASA images of a mountain near Taurus Littrow, said to have been taken on the Moon during the 1972 Apollo 17 mission, with the Hawaiian scene, and believes they could be a match.

The 49th anniversary of Neil Armstrong’s first steps on the lunar surface takes place in July, but many conspiracy theorists across the globe remain convinced it was the biggest cover up of all time.

Moon hoax conspiracy theorists say a desperate President John F Kennedy, who wanted to beat the Russians in the space race to the moon, ordered the production of a series of films in top-secret studios to make it look like NASA astronauts made it to the lunar surface.

He managed to track down 14 of the NASA astronauts that were involved in the various Apollo missions from 1969 to. XXXXXX

He has come away convinced that at the very least there are major question marks over whether the missions went ahead.

Mr Bryant told Express.co.uk there were remarkable similarities between the Hawaiian hill and that depicted in the Apollo 17 imagery.

Clutching a copy of his book Our Forbidden Moon, which includes the images compared to each other, he said: “Look at that. They are taken at slightly different angles, but you can see the same ridges and even down to the rocks in the foreground.”

The book also includes an image of a crater field at Groom Lake, near the top-secret Area 51 US Air Force base in Nevada, USA, that he claims could have been used to film aerial images of the Moon.

He said in the book: “Is this a lunar landscape? No, it’s a crater field at Groom Lake, Nevada, created by nuclear weapon testing.

“But it could easily have been used for lunar mission simulations.

“There is ample evidence that all is not as it purports to be in the official record of he Apollo Moon landings: the behaviour of the crew members before, during and since their missions, the anomalies associated with the lunar surface samples, the many contradictions in the testimonies of astronauts, mission controllers, scientists and photographic experts.

“These all seem to suggest that the entire program may have been an extremely well-executed charade, designed to fulfil President Kennedy’s promise to the American people and provide them with the national pride that such an achievement could have been expected to engender.”

Mr Bryant goes further still in his book to suggest that the first lunar mission may have actually been a success, but that those who landed on the Moon discovered it was already occupied by aliens and were warned never to return, hence the title of his book.

He adds: “Have astronauts and cosmonauts genuinley encountered extraterrestrial craft during their missions?

“Why has there been no serious attempt to return to the Moon or venture onwards to Mars?

“Were the heads of the US and Soviet space programs aware of the existence of an alien presence on the Moon and in cislunar space?”

NASA does not comment on individual conspiracy theories, however, it has long insisted that the Moon landings did happen and there is no substance to the theories.

It also claims there was no evidence of aliens on the Moon or anywhere else in the solar system.

He said the location had been chosen by NASA to look like the Moon for training purposes.

He said: “Before Apollo 17, NASA scientists chose several locations on the island of Hawaii to represent geological situations similar to those the crew might encounter on the Moon.

“The final three days astronauts also spent time at the crest of Mauna Kea, chosen to represent what astronauts Gene Cernan and Jack Schmitt might find at their designated lunar landing site, the Taurus Littrow Valley.

“So, in short, NASA scientists have deliberately chosen geologically similar locations on the Earth, in the Hawaii, to train the astronauts for their mission.”

One Simple Idea Makes It Much Easier to Manage Your Weight Over Time : ScienceAlert
Mysterious ‘Zone of Uncertainty’ Inside The Brain Reveals a Surprise : ScienceAlert
Sword Mistaken For Replica Is Actually An Ancient 3,000-Year-Old Weapon : ScienceAlert
Newly Discovered Fossil Reveals Hundreds of Teeth ‘Never Seen Before in a Pterosaur’ : ScienceAlert
Our Body Temps Have Been Dropping For 160 Years. Gut Microbes May Be Playing a Role : ScienceAlert