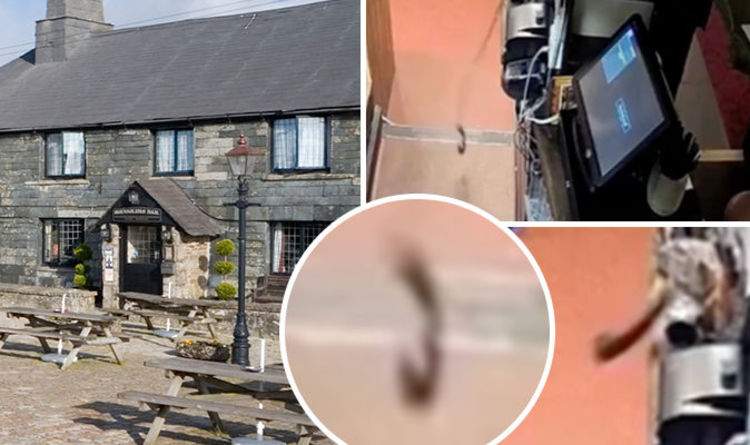 Then, while she washes some beer trays, a wall phone behind her falls off its stand, leaving her apparently scared.

Paranormal investigators who viewed the footage have been able to come up with no rational explanation for the spooky incident.

The historic smuggler’s inn, on Bodmin Moor, rose to fame from being the setting of Daphne du Maurier’s 1936 novel of the same name and it is said to be one of the most haunted inns in the country.

Investigators have been studying the location ever since the happening on October 23 and have now released the footage, Dailystar.co.uk reports.

“It picked up and dropped the wall phone in one room and no one was there.

“We caught it on HD camera, the CCTV is crystal clear.

“April has stated that ten minutes before the incident, a colleague had texted her mobile, which was on the worktop, by the bar phone, to ask if there were any customers left in the bar.

“April had confirmed she was alone and on the footage, you see her look up from cleaning the drip trays, as she thought she had heard the entrance door to the bar open.

“Then the phone receiver drops and she gives a nervous laugh, as there have been multiple strange things happen to her and staff, when working in that area, especially when locking up.

“April then texted Ben the night manager, asking him to check the CCTV.”

Mr Symonds said several other people had investigated the incident, including an electrician who said there was no way the phone could have fallen by itself.

Jamaica Inn is reportedly so haunted it allows ghost hunters and members of the public to carry out weekend and late night ghost investigations or stay overs.

The pub website says: “For years there have been stories of happenings at the Inn. Many people who have stayed have reported strange incidents occurring at night.

“The areas of substantial interest to the investigation were, The Smugglers’ Bar, The Stable Bar (now the museum), upstairs in the old bedrooms, and the rear restaurant/gift shop area.

“Previous managers of Jamaica Inn have heard conversations uttered in a foreign tongue. Some have suggested this ‘foreign’ language could in fact be old Cornish.

“On a moonlit night, when all is still, the sound of horses’ hooves and the metal rims of wheels turning on the rough cobbles can be heard in the courtyard.

“Yet there is nothing to be seen.

“Who can explain the uneasy footsteps heard pacing the corridors in the dead of night? Who is the strange man in a tricorne hat and cloak who appears and then walks through solid doors?”