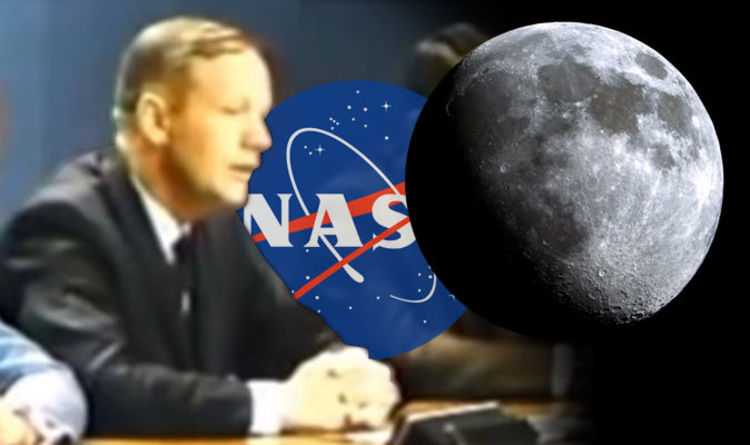 
Armstrong, Buzz Aldrin, and Michael Collins spoke to the world at a special press conference four weeks after they were the first NASA team to land on the Moon in July 1969.

However, conspiracy theorists, who scour through old footage looking for evidence of it being a hoax, claim there are tell-tale signs in their body language.

The 49th anniversary of Armstrong’s first steps on the lunar surface take place this summer, but many conspiracy theorists across the globe remain convinced it was the biggest cover up of all time.

Moon hoax conspiracy theorists say a desperate President John F Kennedy, who wanted to beat the Russians in the space race to the moon, ordered the production of a series of films in top-secret studios to make it look like NASA astronauts made it to the lunar surface.

Bart Sibrel, a top Moon landings denier, has posted footage from the conference on his YouTube channel with a commentary suggesting why it didn’t happen.

He said: “The crew of Apollo 11 nervously, reluctantly, and with the emotion of a eulogy, present their first press conference… with the aid of teleprompters discretely hidden in the desk, in order to help them remember their one of kind experience, that the writers of their script should know nothing about.”

Mr Sibrel even claims that Armstrong slips by forgetting if he should have seen stars or not.

He added: “Notice at time 1:04:53 that Neil Armstrong is asked whether or not he remembered seeing any stars in the lunar sky, a subject the crew was apparently asked to avoid as the correct astrological positions of the constellations were too difficult to simulate in the fake lunar backgrounds.

“Armstrong then wrongly replies with ‘I don’t recall’, to which Aldrin grimaces in discomfort at his error (as if one would forget such an important detail that they witnessed first hand in their alleged universally unique experience).

“To help Armstrong recover from being tripped up by this difficult question, crew member Michael Collins offered assistance by interjecting ‘I don’t remember seeing any.’

“The problem is, he forgot that he wasn’t even there!

“It was Buzz Aldrin who supposedly walked on the moon with Armstrong, not Collins!”

Posters on another conspiracy theory channel which has also shown the footage, were convinced it showed the mission was hoaxed.

“These guys are scared.

“Funny, they seem to have lost the original footage of the moon landing as well.”

Another said: ” This is all you need to see to prove that the missions were faked. Watch the Apollo 13 conference, they look scared too.”

A third added: “Poor men, clearly under threat of death if they reveal the truth… that they went nowhere near the Moon.”

However, others said their behaviour proved no such thing, and that they were just professional astronauts not used to the limelight.

One said on YouTube: “It’s very simply a man who’s extremely uncomfortable in the limelight, as he always has been. Nothing more nothing less.”

There was a discussion on the online debating website Quora.com about whether the astronauts looked tense and perplexed as if they were lying.

The consensus was that they did not, but just appeared tired.

Stuart Hardwick said: “They do not, in fact, look perplexed or tense beyond what you would expect of people born in the 1930s on not in the You Tube era.

“They do appear tired and jetlagged—which they all were. After returning from the moon, they spent two weeks in quarantine, then spent most of August and September on a round the world tour. Then NASA arranged this press conference.”

Ernest Adams added: “Imagine you’re an engineer who has just survived something totally amazing and life-threatening — 75 days on a life raft in the Pacific, say.

“Now the world’s press wants to badger you with questions about it. Bright lights are in your face. Every word counts. Are you really happy doing that?

“These guys are military test pilots. They’re not PR flacks. Sitting in front of the world’s media and having questions fired at them is not part of their job description.”

This Artificial Synapse Can Run a Million Times Faster Than Ones in The Human Brain : ScienceAlert
Many Cat Lovers Are Giving Their Cats Unwanted Affection, Study Suggests : ScienceAlert
Why Do Kids Get Worms, And What Can You Do to Prevent It? : ScienceAlert
Scientists Say ‘space Bubbles’ Could Shield Earth From The Sun, But Would It Work? : ScienceAlert
Astronomers Charted The Sun’s Life, And This Is How The Story Ends : ScienceAlert