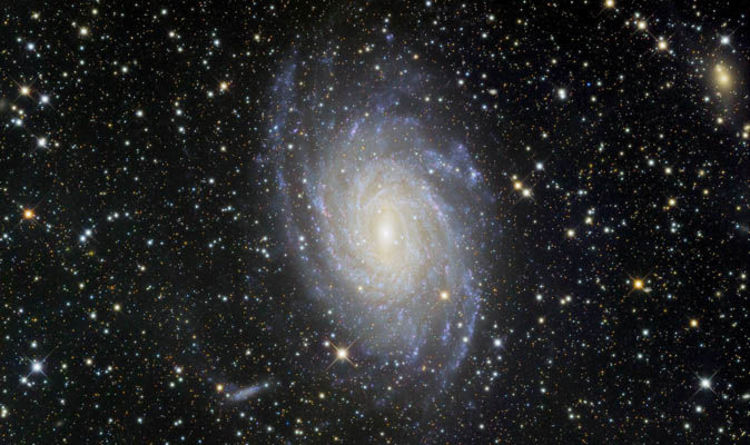 At first glance, the swirling mass of bright stars appears to be identical to the Milky Way in many aspects.

Both galaxies are centred around a cluster of old yellow stars, while younger ones can be seen spreading out towards its arms.

But there is one major difference between the two star systems – their size.

The Milky Way galaxy measures about 100,000 light years across.

And while this sounds huge, this is nothing compared to the much bigger NGC 6744, which measures 200,000 light years across.

“At first glance, it resembles our Milky Way albeit larger, measuring more than 200,000 light-years across compared to a 100,000-light-year diameter for our home galaxy.

“NGC 6744 is similar to our home galaxy in more ways than one. Like the Milky Way, NGC 6744 has a prominent central region packed with old yellow stars.

“Moving away from the galactic core, one can see parts of the dusty spiral arms painted in shades of pink and blue; while the blue sites are full of young star clusters, the pink ones are regions of active star formation, indicating that the galaxy is still very lively.”

The supernova, which is not visible in the photo, occurred when a massive star at the centre of the galaxy collapsed in on itself and lost its hydrogen envelope.

Astronomy enthusiasts hoping to catch a glimpse of the galaxy through their telescopes can find NGC 6744 in the southern constellation Pavo.

From Earth, the spiralling galaxy appears to be a faint, extended object when seen through small telescopes.

A small distorted galaxy companion is seen next to NGC 6744 in a similar fashion to the Large Magellanic Cloud which accompanies the Milky Way.

The stellar companion, dubbed NGC 6744A, looks like a blob in the spinning galaxy’s outer rim.

A study published in February this year found the galaxy has a star formation rate of about 2.8 to 4.7 solar masses per year – twice greater than the Milky Way.

The galaxy photo was snapped by the Hubble Space Telescope – a joint space exploration venture by NASA and the European Space Agency (ESA).

Named after famed astronomer Edwin Hubble, the giant space observatory launched into low orbit over Earth in 1990 and has remained in steady operation since.

However, in less than three years the iconic telescope will be replaced by its successor, the James Webb Space Telescope.

The James Webb telescope is scheduled for launch in March 2021 and its primary mirror is roughly three times the size of Hubble’s.

A Rare Condition Makes Hair Truly Untamable, All Thanks to These Genes : ScienceAlert
Shimmering ‘Lakes’ Under The South Pole of Mars Might Be Something Else Entirely : ScienceAlert
Deep Brain Simulation Could Alleviate OCD When Other Treatments Have Failed : ScienceAlert
Control of a 6-Qubit Processor in Silicon : ScienceAlert
Ancient Burial of a Young Girl Shows How We Carried Our Babies 10,000 Years Ago : ScienceAlert