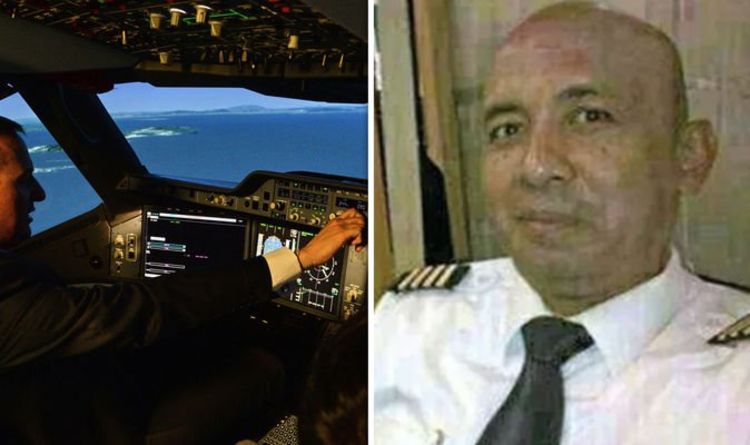 
Malaysia Airlines flight 370 went missing on March 8, 2014, en route from Kuala Lumpur to Beijing with 239 people on board. The Boeing 777 is still missing to this day and exactly what happened to it is still a mystery. However, the official investigation concluded that the most likely final destination was at the bottom of the southern Indian Ocean.

This was worked out from data – called pingrings – sent from the plane to a satellite owned by British satellite telecommunications company Inmarsat.

The data seemed to indicate a flight path that saw the plane turn 180 degrees from its planned route, fly up the Malacca Strait and then southwards over the Indian Ocean.

In the weeks after the plane went missing, attention was naturally focused on the crew, including Mr Shah, MH370’s pilot – as well as his co-pilot Fariq Abdul Hamid.

David Gleave, an aviation expert from Loughborough University, told Channel 5: “The hard disc contained some wiped data that was rebuilt and showed a number of simulations of flights going off to some rather remote locations in the southern Indian Ocean.”

The simulations show a number of waypoints – computer-checked coordinates for each stage of a flight – for each “practice run” on the simulator.

Mr Gleave added: “The forensic report detailed seven points that the captain has made up himself and programmed into the flight simulator.

“Four of these are in the Andaman Sea, which represents the body of water just to the left of Malaysia that we know the aeroplane flew over.

However, police retrieved almost 3,000 coordinates from different files and it could be just a coincidence that some of these, when connected together, had similarities to the believed flight path of MH370.

Mr Shah was an aviation fanatic and used his flight simulator a lot, flew many different paths and so it is not inconceivable that all this does not mean anything.

Mr Gleave was relatively dismissive of those jumping on this as evidence or even proof of the captain’s guilt, labelling it as a conspiracy theory.

He said: “The conspiracy theories are out there to say ‘This is the captain practicing beforehand for this type of flight.’

“All sorts of different reasons could be speculated upon, but we really do need to raise the aeroplane to start finding out whether it was indeed the captain who actually carried out these actions.”

Mr Gleave here is referring to the black boxes, which contain flight recorders.

These are the key to finding out exactly what happened to MH370 but five years after its disappearance it is becoming increasingly unlikely that they will ever be found.

That said, those who blame Mr Shah for the tragedy have pointed to the reported fact that he was suffering with mental health problems and issues in his marriage.

Astronomers Pinpoint The Mysterious ‘Engine’ of a Super-Powerful Intergalactic Light : ScienceAlert
A Lost Interview With The ‘Father of The Big Bang’ Was Just Discovered : ScienceAlert
JWST Has Accidentally Detected a Tiny Asteroid ‘Hidden’ Between Mars And Jupiter : ScienceAlert
Scientists Are Making Catfish Hybrids With Alligator DNA For Us to Eat : ScienceAlert
No One Likes Commutes, But They May Actually Be Good For Mental Health, Study Finds : ScienceAlert