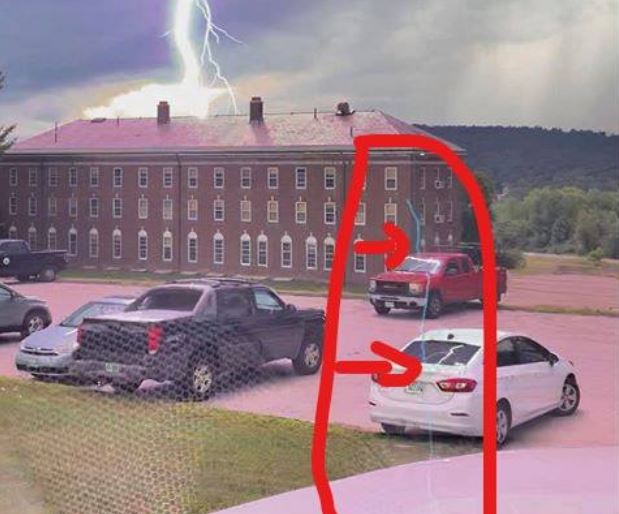 
Yes, that lightning strike is cool.

But look at the circled area. That’s called a “positive streamer.” And it’s extremely rare to capture on camera.

Well this is an extremely rare catch by Karen Butterfield Varney in Augusta tonight.

These transient sky phenomena are sent upward towards a thunderstorm as an “invitation” for the lightning bolt to connect with.

And it appears that one is coming from her vehicle.

According to some scientists:

Basically the idea is that in normal discharges you have an electron avalanche in which electrons get stripped off near the cathode and start accelerating towards the anode. If they gain enough energy from the electric field by the time they collide with another electron, they can knock off another electron and then you have 2 that are traveling towards the anode. So in normal operation you have an ionization front that goes along the negative path from cathode to anode.

In positive streamers you have the opposite, an ionization front that goes from the anode to the cathode. In this case you don’t have electron impact doing the ionization, instead you have a very localized, strong electric field. This field occurs at the “head” of the streamer and rips off electrons from the atoms. The electrons leave so quickly that you’re left with a large number of ions behind and that leads to a strong electric field which rips off the next group of electrons and so on. At least this is my understanding of the process.

Those streamers are the sign a lightning strike will hit! But hey, it’s so fast, that it’s already too late!

How a Dead Girl in Paris Wound Up With The Most-Kissed Lips in All of History : ScienceAlert
No One Likes Commutes, But They May Actually Be Good For Mental Health, Study Finds : ScienceAlert
AI Predicts We’ll Breach Our Climate Goal in Just 10 Years : ScienceAlert
High-Fat Diets May Break The Brain’s Ability to Regulate Calories : ScienceAlert
Incredible Footage Shows Planets Circling a Star Light-Years Away : ScienceAlert