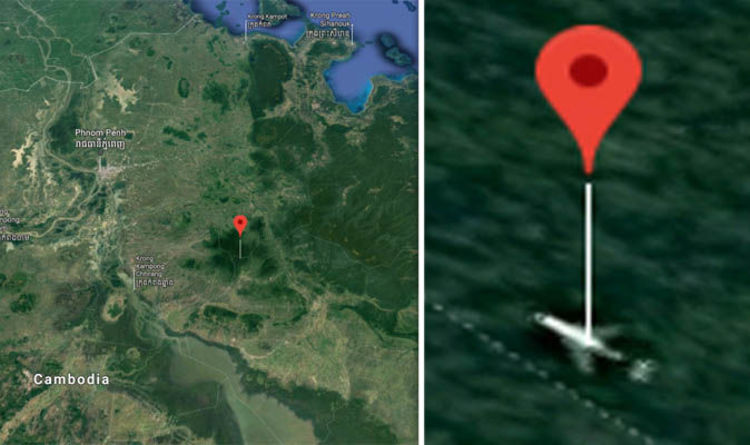 
The MH30 flight from Kuala Lumpur may be on the verge of discovery after it took off and mysteriously vanished on March 8, 2014.

British MH370 investigator Ian Wilson believes the missing jet crashed in the middle of a wild Cambodian jungle, shortly after it took off towards Beijing.

The startling claim was made after Mr Wilson encountered a Google Maps satellite photo of what appears to be a crashed plane in the Cambodian jungle.

If confirmed to be the missing MH370 plane, Pastor Begley said the families of the missing 227 passengers and 12 crew members could finally have some closure.

The Christian preacher praised Mr Wilson for his recovery efforts, saying: “Look, I’m hoping this is the site and we can find a way to get closure here because the 239 souls that have been lost, where are they?

“What does this mean? Is this the plane that crashed? Is that what we’re looking at or is it another plane everyone has forgotten about?

“I mean it’s obvious it is a plane – you can see all the trees knocked down around this thing.

“There’s no way, no plane flying through there. I mean what are they talking about?

“We’re going to find out because I think Ian Wilson is going to get to this thing and certainly there should be military guys dropping in there now. Somebody’s got to respond to this.”

Pastor Begley said the plane in question could be the real deal because Cambodian authorities would have otherwise dissuaded Mr Wilson from travelling to Cambodia.

He said: “If there’s a crash in the Cambodian jungle, and they know about it, people are going to go and get the parts, they’re going to go to the crash site. There’s no doubt about that.”

To date, the MH370 flight remains one of the biggest aviation mysteries of the 20th century.

The Malaysia Airlines flight went silent just 38 minutes into its flight and has remained off the radar ever since.

A July 2018 report compiled by the Malaysian Ministry of Transport concluded it could not determine any conclusive cause of the plane’s disappearance.

Mr Begley has now said: “Ian finds it on Google Maps and it’s incredible that he may have discovered it.

“And I don’t think it’s going to take that long for Ian to find this information.”

Mr Wilson and his brother Jackie Wilson flew out to Cambodia this month on a quest to find the missing plane in person.

The Moon Stole Something From Deep Inside Earth Eons Ago, and Scientists Can Prove It : ScienceAlert
Jupiter’s Ice Moon Europa Probably Has Upside Down, Underwater Snow : ScienceAlert
Hidden ‘Hunger Stones’ Reveal Drought Warnings From The Past : ScienceAlert
Astronomers Charted The Sun’s Life, And This Is How The Story Ends : ScienceAlert
Many Cat Lovers Are Giving Their Cats Unwanted Affection, Study Suggests : ScienceAlert